The Rockometer: Quarantine the Past by Pavement 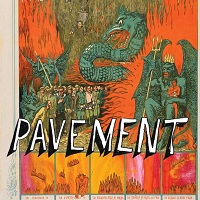 Pavement
Quarantine the Past
Matador Records

Let’s put aside for a moment, the notion of the greatest hits album, or in the case of Pavement, the career retrospective, being an outmoded convention left over from the days before iPods, mp3s, and declining record sales.  Forget for a moment, the greatest hits album and its purpose to either a) Wring every last bit of sales out of an aging band, or b) Fulfill the record contract for a stale band.  Yes, you could go in your iTunes library and re-arrange your own collection of mp3s and build your own Pavement playlist.  Yes, within two googles you could locate any Pavement songs missing from your collection, and chances are you wouldn’t even have to pay for them.  We’re not going to talk about any of those things.  Instead, let’s consider how Pavement’s Quarantine the Past makes a convincing argument for placing this lovable group of Stockton, California slackers amongst the most important acts from the ’90s alt-rock explosion.

Key to the success of this set is the decision by Pavement and Matador Records to not include any b-sides (There have been plenty of those included with Matador’s deluxe, re-issue series of Pavement’s back catalog), and not to get the boys back in the studio for a half-assed new song, or two.  Beginning with “Gold Soundz,” one of the few songs feature here which was an actual single, and on through “Stereo,” “Summer Babe,” “Cut Your Hair,” and “Date W/IKEA,” Quarantine the Past provides one enjoyable moment of almost-in-tune, ragged, ramshackle,  pop after another.  This result can be surprising for even the most ardent Pavement supporters, for when you break the band down, here is a group which features two guitars which barely have an idea what the other guitar is doing, two drummers who often struggle to keep the beat in time, one singer straining about something only he can decipher, and one unconventionally smooth bassist.  Did they excel by chance or by magic?  Did they excel because they were so earnest, or because they didn’t care?   Or, perchance, did these slackers succeed because they were smarter than us all along?  Only Stephen Malkmus and Pavement know the answer, and therein lies their true genius.  9 out of 10 on The Rockometer.