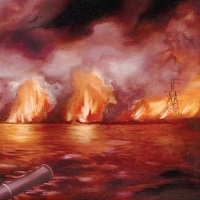 “Like the Ocean, Like the Innocent (Pts 1 & 2),” the lead track from The Besnard Lakes’ latest, The Besnard Lakes Are the Roaring Night,” isn’t exactly the stuff of  Top Five Side One Track Ones of all time.  That’s the mild critique.  The more scathing description would replace the band’s evocative song title with something along the lines of “Falsetto Gone Wild,” or “One Octave Over the Line.”  For try as they might, that faltering falsetto which quickly greets the listener strives, but never can quite get itself in key.  It’s a shame, really, because once you get past that eight-minutes of forever flat falsetto, you’ll find a dynamic, continually engaging album featuring warm guitars, light, uplifting harmonies, tasteful string arrangements, and brightly shining keys.  You’ll find an album which draws inspiration from The Beach Boys, Pacific Northwest folk, dream pop, and shoegaze, and does so in a delicately shifting manner which mixes in and out familiar movements from underground music’s history while always retaining its sense of self.  To put in another way, The Besnard Lakes have an uncanny ability to sound like any number of their peers and influences without sounding exactly like any one of them.  Now, if only one of their peers could have told them to take it down an octave on that opening number, we would be talking about a great album, not one which could have been great.   7 out of 10 on The Rockometer.