Warning: "continue" targeting switch is equivalent to "break". Did you mean to use "continue 2"? in /nfs/c06/h01/mnt/88637/domains/blog.irockcleveland.com/html/wp-includes/pomo/plural-forms.php on line 210
 I Rock Cleveland I Rock Cleveland | “Dealbreaker” by The Hot Rails

“Dealbreaker” by The Hot Rails 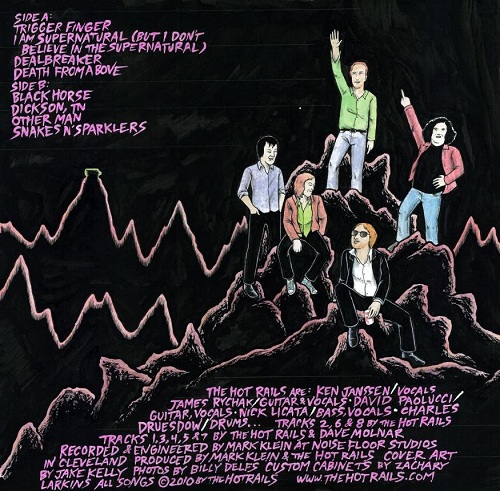 If it was hard being a rock band  in 2003, when the Supersuckers first released the shoulda-been-a-classic single, “Rock ‘N’ Records (Ain’t Selling This Year),” imagine what it’s like being a rock band in 2010.  Good luck getting any attention unless you have an ex GNR member or an ex Stone Temple Pilot in your band, and even then, you’re not exactly getting the right kind of attention.  You’re most likely on the wrong end of some snarky young turk’s attempt at criticism.

Not that attention is what these Cleveland riff-rockers , The Hot Rails, seek.  Sure, they’d like a few more bodies in the bar.  They’d like to be not so broke after pressing a record.  Or, god willing, they’d like to break even when all the bills are paid.  Those things would be nice, but if you’re shredding in 2010, it’s not for fame or protecting your pittance.  It’s about shreddding.  And on songs like, “Dealbreaker,” from their forthcoming 12″, Single Entendre,”  the boys do a fine job at that.  The Hot Rails’  blazing guitar riffs and chugglin’ rhythms are an unapologetic, head-banging salute to the days of American beers, cigarettes, naked lady mud-flaps, and Rock ‘N’ Roll records.  Records which weren’t out to be clever or cute or critically acclaimed, but records whose only goal was to rock.

The Hot Rails will be celebrating the release of their latest 12″, Single Entendre, this Saturday night at the Beachland Tavern. Banderas and All Dinosaurs will be opening and Party Sweat will be closing things down with an after show DJ set.