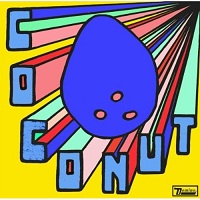 In an interview with Wired.com’s Scott Thill, the Archie Bronson Outfit’s Dorian Hobday spoke of how the band’s goal in recording their latest offering, Coconut, was to make a 21st Century sounding album. It’s a noble goal. Even moreso when you consider Rock ‘N’ Roll, in particular, has had a hard time freeing itself from the shackles of its own past successes.  Think of any movement in rock music the past ten years, be it lo-fi, garage rock, noise rock, power pop, sludge, doom, shoegaze, or plain vanilla indie rock, and one can imagine that same album being made ten, twenty, even thirty years in the past.  This phenomena isn’t new to rock music, of course.  Rock ‘N’ Roll has a long history of borrowing influences from the past.  However, what makes our current creativity crisis so glaring is the fact that past generations, like the punks, would look back for inspiration and move music forward.  Today, that moving forward bit is largely missing.

When the Archie Bronson Outfit look to the past, they see albums like The Clash’s genre-busting Sandinista! and Primal Scream’s electro-punk work from XTRMNTR and Evil Heat.  To move themselves forward, they enlisted the help of producer Tim Goldsworthy (ex DFA).  When this combination works, as it does on the three opening tracks — The crunchy and combustible “Magnetic Warrior,” the fluttering, blurry, and bouncy  “Shark’s Tooth,” and the booming, electro-funk of “Hoola” — the results are striking, and yes, future facing.  Yet, as the album progresses, one gets the feeling the boys in the band paid too much attention to their primary goal (Making a 21st Century rock album) and lost sight of their standing duty (Making a rock album).  “Chunk,” and its minimal, new wave groove feels tepid and flat.  While the best that can be said about “You Have a Right to a Mountain/One Up Yourself,” is that it’s dedicated to its lack of direction.  The band right themselves on the latter half when they mingle and slightly mangle psychedelic pop (“Better Believe It”) and ambiet rock (“Hunt You Down”) with their futuristic impulses, but as this point their experimentation no longer has the same sense of momentum as it had earlier on.  And therein is our answer as to why so many Rock ‘N’ Roll records still hold on to the past — It’s much easier to list your influences as band A, band B, and album C and record an album, than it is to take those same influences and make something new.  Most don’t even bother to try. 6 out of 10 on The Rockometer.