The Rockometer: Rush to Relax by Eddy Current Suppression Ring 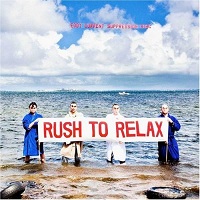 As the story goes, Australia’s Eddy Current Suppression Ring spent more money on the cover of their latest release, Rush to Relax, than they did on recording the actual album.  When you consider the cost of having an airplane fly a banner over a beach versus the cost to book six hours of studio time (Which was the full extent of Rush to Relax’s recording), it’s certainly a plausible story, too.

There’s a plug-in and rock-out aesthetic present throughout this set where both ballads and blazing rock numbers are attacked in the same headlong fashion.  Quirky, off-beat, almost in-key, numbers about vocalist Brendan Suppression’s quest to be a better man like “Gentleman” and “I Can Be a Jerk”, have the same vitality as lead track, “Anxiety,” a raved-up and roughed-up garage rocker featuring Mr. Suppression at his accented, manic best (or worst, as the case may be). Plus, Eddy Current’s guitar solos, whether they’re brisk, aggressive stabs at the strings yielding sharp static, or more protracted melodies in the ramble-tamble vein (Check the extended jams “Turning Out” and “Second Guessing” for examples of both), are of the making-it-up-on-the-spot variety, relying on feeling, instinct and aggression to add an extra frantic layer to an already jagged set.

Yet, as jarring and ragged and spontaneous as Rush to Relax can be, it’s also the Australian quartet’s most confident and cohesive work to date.  To follow the quartet from one tempo to the next, from sensitive man to mad man, from one-minute, thrashing punk to kiwi pop to the sounds of waves gently rolling onto to the beach, is to be right there with Mr. Suppression as he tries desperately to find some peace of mind.  And while there’s no guarantee his moment of zen lasts much past the album’s end, the work gathered here on Rush to Relax demands to be spun again and again.  9 out of 10 on The Rockometer.