Warning: "continue" targeting switch is equivalent to "break". Did you mean to use "continue 2"? in /nfs/c06/h01/mnt/88637/domains/blog.irockcleveland.com/html/wp-includes/pomo/plural-forms.php on line 210
 I Rock Cleveland I Rock Cleveland | The Rockometer: Mount Carmel 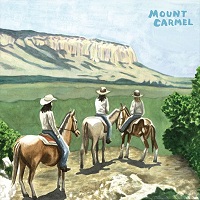 Listening Columbus, Ohio’s Mount Carmel is a bit like living in an alternate universe where glam, prog, punk, disco, new-wave, post-punk, metal and grunge never happened, and the best Rock ‘N’ Roll ever produced was still made by those hard and heavy power trios of the late ’60s and early ’70s.  Writing for Still Single, Doug Mosurock likens this debut to the initial offering from another band of throwback, rockers, Witchcraft.  Adding, “I could actually see this getting insanely popular, even, because these three young men are going to be the band that revives this sound (UK Blues Rock) altogether, and takes it to the minimal endpoint it longed for in 1972. A perfect record.”  I tend to compare the Mount Carmel experience to the first time hearing  Akron retro-rockers, The Black Keys, in that you’ll be floored with the thought, “Damn, listen to those three young cats from Columbus laying down that massive sound.”  It’s unexpected, improbable, the way Kevin Skubak and brothers Pat and Matthew Reed channel the days of hard rockin’ gone by.  From the pre-Sabbath sludge of “Livin’ Like I Wanna” to the relentless pummel of “Still Listening,” and on through the big, bad, Clapton-like blues jams, like “ZZ Breakers” and “Sacksburg,” you’d swear these longhairs shared stages with the likes of Cream and The Jimi Hendrix Experience.  Instead, they’re a part of a growing number of modern day, rust-belt rockers eschewing the fickle trends of the coasts for blazing guitar riffs, boogie bass, and drum solos.  Yes, you read that right — drum solos — In the middle of “Hear Me Callin,'”  there’s a thumpin’ kit workout, similar to the one Zeppelin’s John Bonham threw down during “Moby Dick.”  Again, unexpected, but when you consider how indie rock is hanging on by mimicking the same three or four influential bands from the ’80s and ’90s, and consider how the latest trends seem to consist of taking an old trend and going lo-fi, it’s a most welcome development, like the whole of Mount Carmel’s self-titled album, itself.  9 out of 10 on The Rockometer.