The Rockometer: Heaven is Whenever by The Hold Steady 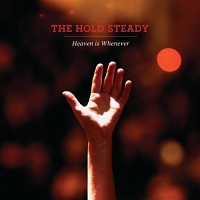 The Hold Steady
Heaven is Whenever
Vagrant

With each new release Craig Finn and The Hold Steady inch ever so closer to recording their very own “Pink Houses,” “American Girl,” or “Born to Run,” cementing their position as the pre-eminent American, heartland Rock ‘N’ Roll band of our time.  Some may decry the band’s recent direction, but in a day and age where it’s harder and harder for a rocker to make a living on Rock ‘N’ Roll, you can’t really fault a band for wanting a hit single or a hit album.  Hell, The Hold Steady already have their share of underground rock hits — “Sequestered in Memphis,” “Constructive Summer,” “Massive Nights,” and “Your Little Hoodrat Friend,” are but a few of the songs the band’s sweaty, staggering dude army sing and scream with their beers in the air.  Yet, the problem with Heaven is Whenever and The Hold Steady circa 2010 in general, is that if you’re gonna go for that mainstream hit, you have to go all in.  Bing the cleaner, better produced version of the ballsy, bar band you’ve been, one with statuesque guitar solos ripped from the hey day of MTV, stunted tempos, and vocals relieved of their agitation isn’t going to do it alone — You also need that one killer track.   Now, if you’ve followed the band over the course of their previous five albums you know they’re capable of matching John Mellencamp with their own “Pink Houses” about the bombed-out drug den at the end of the street.  They can top Tom Petty’s “American Girl,” with one of their own, one who pulls tricks to pay off her boyfriend’s gambling debts.  They could do Bruce’s “Born to Run” one better with a born to run from the skinhead at Sully’s on the Southside who wants to mash your bones with a baseball bat for “accidentally” sleeping with his part-time girlfriend.  Unfortunately, none of those songs are here.  5 out of 10 on The Rockometer.