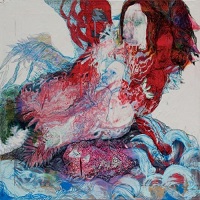 Thee Oh Sees don’t want you to listen to, like, or share their new album, Warm Slime, with all of your internet friends.  That’s one explanation as to why John Dwyer and the band would make the curious decision of slotting a 13-minute, super-extended, uninteresting, total drag of a number on side one, track one.  Or, perhaps, this San Francisco garage-pop outfit is indulging in some good, old self-defeatism, purposely making their album less appealing so they don’t have to deal with their burgeoning underground fame.  Or, maybe it’s a prolific man and a prolific band doing with prolific bands are apt to do – Record any old thing on tape for the sake of being prolific.  Whatever the case, they don’t posses the musical chops to make a 13-minute song which should have been three minutes long the least bit gripping — The best they can muster are slight variations on the same eight-bar, boom, slap, crash rhythm, occasionally raising or lowering the volume, or adding a squeak here and a squeal there.  The other half of Warm Slime, surprisingly, isn’t nearly as bad as its opening would portend.  The upbeat, jangle pop of “I Was Denied,” is exactly the type of single you’d expect from Thee Oh Sees at this point in their career — Quick, scooting and danceable.  While the rock-a-billy and surf-rock influences heard on “Casticiatic Tackle,” and “Mega-Feast” provide a new twist on the band’s signature high-reverb, mega-echo style.  Too bad they had to be d*cks with the first 13 minutes of your time.  If they had placed the title track at the end of side one or at the end of side two where it belonged, or better yet, had exercised some editing on “Warm Slime’s” 13 minutes, then we wouldn’t have had that big, enthusiasm-sucking, interest-killing, black hole of a beginning, and things would have turned out much better for both the listener and the band.   5 out of 10 on The Rockometer.