The Rockometer: Brothers by The Black Keys 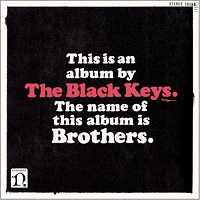 Dan Auerbach and Pat Carney of The Black Keys sure kept themselves busy during the time between their latest full length, Brothers, and their previous album, 2008’s Attack and Release.  First, there was Keep it Hid, the Dan Auerbach solo album released in the spring of ’09, recorded with the backing of San Antonio roots-rock band, Hacienda.  Carney then countered with Drummer, an indie rock supergroup of sorts, comprised entirely of Akron area drummers.  Finally, the duo would come back together at the tail end of ’09 for Blakroc, a hip-hop inspired project spearheaded by producer Damon Dash, featuring guest spots by Mos Def, RZA, Raekwon, Q-Tip, and Nicole Wray, amongst others.

While Auerbach and Carney maintain they were never close to retiring The Black Keys brand, their time apart, and their subsequent reunion under the Blakroc banner, accomplished something a big-name producer like Danger Mouse couldn’t do on Attack and Release — Free the Akron duo from their self-imposed constraints.  Auerbach’s voice is more confident and more dynamic.  He even shows off a striking falsetto on Brothers’ lead track “Everlasting Light” and again on “The Only One,” and the Jerry Butler cover, “Never Gonna Give You Up.”  Carney, meanwhile, has become more than just a heavy hitter behind the drum kit, rarely relying on standard rock rhythms, instead taking cues from his work with Blakroc, playing sharply accented, urban influenced beats.  Then, there’s the music itself.  In pre-release press, Carney explained how many of the songs which ended up on Brothers started with keyboard or bass, and not a big, blasting guitar riff.  Consequently, with Auerbach and Carney pulling double duty in the studio (Nicole Wray is the only other musician appearing here, contributing back-up vocals on a few numbers), Brothers is both the fullest sounding, and the most nuanced work the duo have produced to date.  Classic soul and R&B contribute as much to their sound as do their past standards — Old-time blues and ’70s riff-rock.

More times than not, this re-configuration of The Black Keys from a stripped-down, guitar and drums duo, into a full-blown, Rock ‘n’ Rhythm ‘n’ Blues band, pays off quite well.  Lead single, “Tighten Up,” charms with a thumpin’ bass drum beat, whimsical whistling, and short, staggered bits of guitar.  While “Howlin’ For You,” provides a remixed version of The Black Keys you’ve grown to love, one where the low-end of Gary Glitter’s “Rock ‘n’ Roll Pt. 2” is boosted, re-purposed and paired with cutting and squelching, filtered guitar.  Later, Auerbach and Carney create a vibe which is positively Wu-like on “Too Afraid to Love,” then show off their diversity by diving into Spaghetti Western soundtracks on ‘Ten-Cent Pistol,” and ’70s soul and funk with “Sinister Kid,”   none of which could have been done convincingly with just drums and guitar.  Surprisingly, Brothers only lags when the Akron duo retreat too far into their comfort zone of big, hearty Rock ‘N’ Roll, as they do on “Next Girl,” and “She’s Long Gone.”  Some of the old-style may have been necessary to placate the die-hards, but when the big riffs hit, they feel strangely out of place.  For it’s not the big riffs that fuel Brothers, or The Black Keys in 2010 for that matter, but a deep, sustained groove; A groove which not only encompasses rock, but also hip-hop, soul, and rhythm and blues; A groove largely responsible for Brothers being The Black Keys’ bravest, if not their best, work to date.  8 out of 10 on The Rockometer.