The Rockometer: Back in the USSA by Prisoners 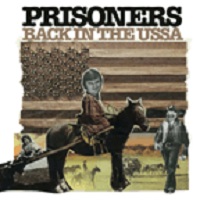 Prisoners
Back in the USSA
Smog Veil

Back in the USSA, the debut album by Cleveland upstarts, Prisoners, is classic rock, but not classic rock in the sense of Two-fer Tuesdays, No-Repeat Wednesdays, or Drive Time Traffic Jams.  Rather, it’s classic in the sense that its influences — The Stones, The Faces, The Who, The Replacements — are all bands any rocker worth his ripped jeans and Salvation Army shirts should know and love.  It’s classic in its indifference to trends.  It’s neither hi-fi nor lo-fi.  It isn’t fussed and mussed over, mucked up or dumbed down.  It sounds like a rock record, perhaps the best rock record the Replacements never made.  The one-two kick of “Evangeline” and “You’re Goin’ Down” establishes the band’s three guitar, bar rock attack which is punctuated by vocalist Jason Look’s pained, withering delivery.  At any moment, he could be on his last breath, or ready to bounce back with a broken beer bottle and a fearsome sneer.  Later, the band ratchet things up with proto-punk (“Teenage Shatner,”) and a beat-down, but not beat up country-flavored jam (“Little Old Me,”)  and bring the listener back down with some drunken doo-wop (“Tied Up in Shadows,”) and the electric ballad, “Loser,” a number reminiscent of ‘Mats standards like “Answering Machine.”  When the needle reaches the end of the title track, Back in the USSA, reveals itself to be a classic in another sense — Like the best records in your collection, you’ll want to flip this one back over to Side A for a second spin.  8 out of 10 on The Rockometer.

Prisoners album release party will be happening this Saturday, June 19th, at Blue Arrow Records in Collinwood.  A performance by the band will be taking place afterward at the Cool Ranch, the spot formerly known as Black Eye, on East 71. and Chester.