The Rockometer: American Slang by The Gaslight Anthem 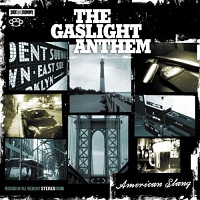 The Gaslight Anthem
American Slang
Side One Dummy

There’s something going on in Jersey, away from the city and the trend chasing hipsters, away from the shore and the camera mugging guidos and guidettes, away from the back rooms and the made men. Young bands like Titus Andronicus and The Gaslight Anthem are embracing the tradition of The Boss and Jon Bon and are leading a new generation of working class, Rock ‘N’ Roll heroes.

The songs collected here on The Gaslight Anthem’s American Slang, in particular, are punch-in/punch-out, meet up with the boys for beers on a Friday night, Rock ‘N’ Roll at its best. The band never met a member of the underclass who didn’t deserve their three minutes of fame, and they never look past an opportunity to deliver a rousing chorus. If they can tell a tale of struggle and accompany it with some uplifting, “Whoa, whoa, whoa’s,” well, then, that’s all the better.

Numbers like the tough-edged, title track, “American Slang,” and “Stay Lucky,” feature terse, pointed stabs of guitars and verses of mid-tempo punk always hinting at the big moment, the moment when Brian Fallon frees that rough, scruffy, powerful voice of his. “Diamond Church Street Choir,” meanwhile, with its swinging, finger snapping rhythm, hard-hat ethos, and vibrant sing-along, is one saxophone solo away from being a Bruce Springsteen and the E-Street band classic. As it stands, it’s one of the Gaslight Anthem’s finest, with Fallon exhibiting surprising range and clarity, proudly carrying on the mantle of blue-eyed, soul.

Ye, it’s not only The Gaslight Anthem’s fearless approach to songwriting which makes American Slang such a treat, but the boys along with producer Ted Hutt, also show an uncanny knack for getting the most out of every song. Take “Bring It On, for example. On this, another soulful number, they know when to let the guitars slink in the background, when to let them slay, and when to drop them altogether. They’re masters of the dramatic pause, building anticipation in the listener as the refrain nears. And at that point, they know when to bring the gang in on the background vocals and when to let Fallon show off those damn fine pipes on his own. It’s the type of song, and album, for that matter, which is only possible when you possess the knowledge, talent, and desire of your forebearers — Bruce Springsteen, Van Morrison, Joe Strummer, and every man who ever heard a rock record and aspired to something greater in life. 9 out of 10 on The Rockometer.