The Rockometer: Expo 86 by Wolf Parade 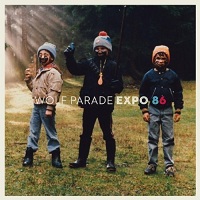 The problem with prog rock, as the Vancouver-based, indie-rock band, Wolf Parade are finding out, is that you can’t simply dabble in it.  Oh, you can tell yourself, “I’m just practicing my complex time signatures,”  “Let me trick out my keyboards, just this one time,” but, “I’ll never set the Lord of the Rings Trilogy to song.”  Yet, the mere fact you dipped your toes in the waters of Rush, Genesis, and Pink Floyd means you’re already half the way to Jethro Tull.

This is an especially troubling development if you’re a fan of the Dan Boeckner half of the band.  He’s always been the every-man rocker to Spencer Krug’s fanciful dreamer.  Here, on Expo 86, however, the creeping extravagance of Krug’s progressive impulses have begun to infiltrate Boeckner’s work, too.  Take “Palm Road,” for example.  It’s a typical Boeckner composition — The Boss and Arcade Fire played with post-punk urgency — but Krug has to go all Yes on us during the bridges with these wild and overbearing keyboard melodies, melodies detached from everything else going on around him.  Similarly, on “Ghost Pressure,” Krug unearths some trancey keyboard sounds and ’80s synth-pop melodies when the basic electric piano would suffice.  Then, later on “Pobody’s Nerfect,” the same situation emerges, again — One half of the band is thinking bar-rock while someone else wants to display his musical chops.

Granted, Krug’s dalliances in decadence on his own tracks “What Did My Lover Say,”  “Cloud Shadow on the Mountain,”  and “In the Direction of the Moon” are spot on.  His songwriting, which relies less on verse-chorus-verse, and thrives on freedom from structure, needs these melodic excursions to work.  Still, one has to wonder, how much longer the partnership of Krug and Boeckner can be sustained when now, more than ever, the two are writing from such stylistically opposed viewpoints.  Unless one or the other gives in, we’ll either reach the point where Wolf Parade are penning ten-minute odes to witches and warlocks or Wolf Parade will cease to be a band.  5 out of 10 on The Rockometer.