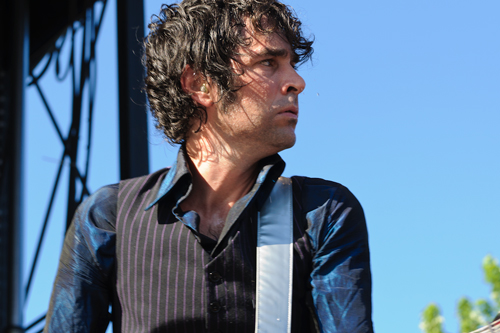 To quote the man, Jon Spencer, “The Blues Explosion is number one in Philadelphia, in DC, number one in Chicago, number one in Detroit, in Austin, Houston, Dallas, San Francisco, Los Angles, Seattle, Portland, Vancouver…  Number one in New York City, Kansas City, Oklahoma City, Cincinnati, Mississippi…”  And on this day, The Blues Explosion were number one in Union Park at the 2010 Pitchfork Music Festival.  God willing, members from the festival’s other bands, and all those other musicians in attendance not performing this weekend, took notice, for one could learn a lot about what it means to be a performer (A real performer, not someone who stands on stage and sheepishly plays his or her songs) by watching the Jon Spencer Blues Explosion.

Twenty years on from their birth in NYC, the Blues Explosion is still a band that looks, lives, and sweats the blues.  Spencer looked stylish in his tight vinyl pants, shiny shirt and black vest.  To his left was guitarist, Judah Bauer doing the country-blues man thing with state trooper shades.  And while one would never say drummer Russel Simmins was stylin’ like his blues brothers, it hardly mattered for the man was a monster behind the drums.

From the get go, the Blues Explosion’s set consisted of one filthy riff after another.  There were no breaks.  The blues doesn’t take a break.  When one song ended, Spencer, Bauer, and Simmins kicked right into the next, one.  And Spencer, well that man put every ounce of his being into his performance.  Songs like “The Flavor,” and “Chicken Dog,” had the thirty and forty-somethings groovin’ and movin’ like it was 1997.  Hey, if the man is going to pour buckets of seat for the blues, it was the least the crowd could do.

At this point, Spencer and company had the crowd in their hands.  They eagerly took in all his ramble-tamble about the blues, nodded when Simmins led the band through the smoother sections, and thrashed, jumped and hollered when Bauer and Spencer went ape-sh*t on the six strings.  Then, during “Magical Colors,” it appeared Spencer had gone too far with the blues — Too many righteous riffs, too much gettin’ on up and gettin’ down, too much action for that wiry frame of his, and he collapsed in a heap on stage.  Yet, there’s one thing you gotta know about the blues at this point.  The blues does not die, and like an Italian soccer player, Spencer had a miraculous recovery and sprung back to life like he hadn’t been bustin’ his ass for the blues that last hour, like the blues is all-powerful, all knowing, and watching over his mortal soul.  And you know what?  The blues when played by the mighty Jon Spencer Blues Explosion, when it’s tortured to inches of death, when it’s twisted and mangled and mixed with rock, funk, hip-hop, and R&B is that powerful. 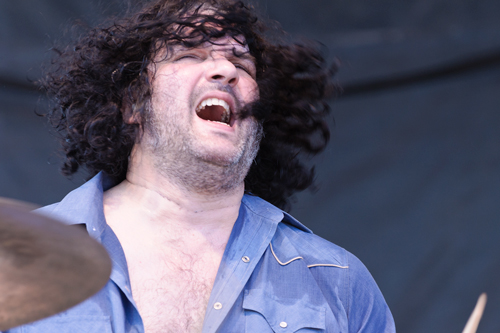 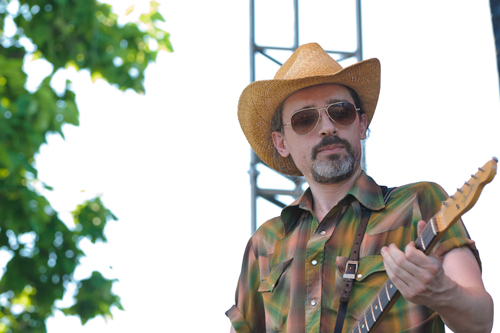 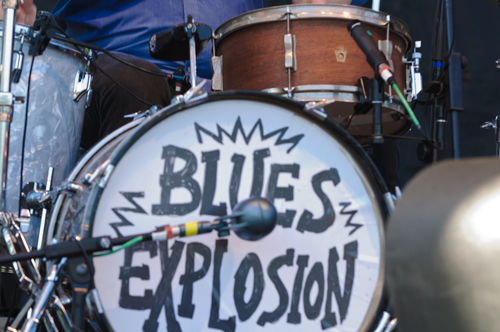