Warning: "continue" targeting switch is equivalent to "break". Did you mean to use "continue 2"? in /nfs/c06/h01/mnt/88637/domains/blog.irockcleveland.com/html/wp-includes/pomo/plural-forms.php on line 210
 I Rock Cleveland I Rock Cleveland | 2010 Pitchfork Music Festival: Lightning Bolt 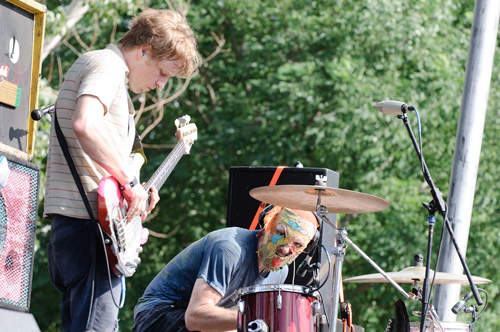 At approximately 3:45, a text message was sent from a music critic to his photographer.  It read, “All these bands are boring the sh*t out of me.”  At approximately 4:15, the maniacal Lightning Bolt took to the A stage.  Goodbye, boring.  Hello, thrashing.

To imagine the sound of this Providence, Rhode Island two-piece, think of the biggest piece of heavy machinery you can picture, like one of those humungous tunnel-drilling machines from the Discovery Channel.  Now, hold on to that sound, and add a 50-member drum corps, and put that drum corps down in the hole with the humungous tunnel-drilling machine.  Now, we’re close, but that doesn’t capture the action.

From the very moment drummer Brian Chippendale and bassist Brian Gibson took the stage, a change ripped through Union Park.  Chill out.  Kill in.  Chippendale certainly looked the part with that sh*tty, Hannibal Lechter mask of his.  More importantly, he played the part, too, killing that mismatched drum kit of his.  His neck veins were popping.  His arm veins were popping.  He had veins popping on top of popping veins.  He played with so much speed, so much aggression, and so much power, the video screens could hardly capture his movements.  That sound of a 50-member drum corps?  It was all from one man.

Meanwhile, Gibson ripped his bass through a very large array of effects, producing sounds bass guitars were never meant to make — guttural sounds, blaring screeches, the rumble of an out of control semi-trailer speeding down a brick road.  Occasionally, one could catch a note, or one could catch a piece of a melody and when that note escaped it was the sweetest thing.  And when Lightning Bolt decided they wanted to play a “song,” they unleashed a beast of a song, the aptly named “Colossus.”  Much bigger doom metal bands have given their soul to satan for a riff that mighty.

At approximately 5:15, a music critic had another message for his photographer, “We’re Lightning Bolt.  We rocked your lame a**.  Good night.” 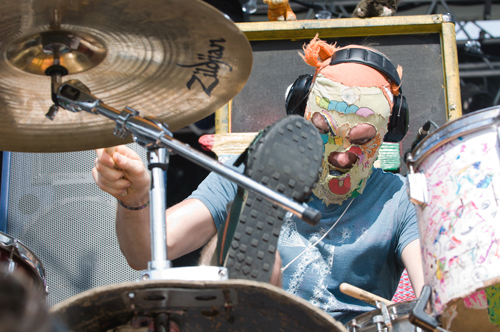 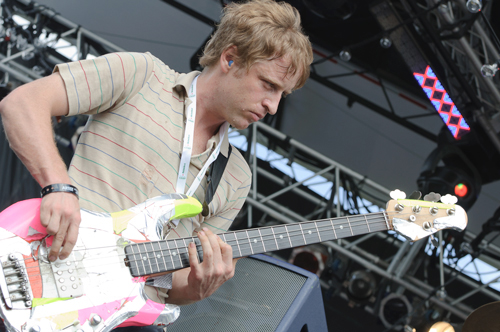 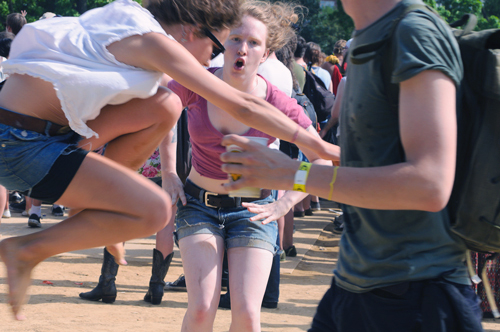