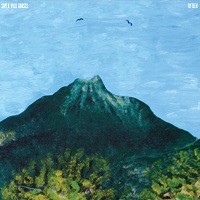 True to their name, Super Wild Horses are a free and instinctive, rock and pop duo from Melbourne, Australia, who by luck, grace, or more likely, an incorruptible feeling for melody, happen to find themselves in possession of one of the year’s best records to date.

Throughout their first full length, Fifteen, Amy Franz and Hayley McKee harmonize like sisters and trade instruments like best friends forever. They both sing play guitar, keyboards, and drums, switching positions from behind the kit to out in front frequently between songs. While this method may prevent both Franz and McKee from ever becoming technically skilled musicians, it does feed the primitive interpretation of The Breeders, Bikini Kill, and Dischord post-punk heard throughout the record. It’s a quality only accentuated by Mikey Young’s production. The Eddy Current Suppression Ring man takes his cues from Steve Albini, letting the songs and the instruments do the bulk of the work, assuring a spacious and minimal mix while still retaining a noticeable amount grit.

Surprisingly, for a group with limited guitar acumen (You can actually count the distinct notes played on many songs and there’s even fewer chords) and only the most basic four-four, Rock ‘N’ Roll rhythms with but the occasional scatter-shot fury, the songs never feel half-finished. Rather, as Franz and McKee sing, strain and sometimes scream on the garage rockin’ title track, “Fifteen,” one hears untarnished emotion. Similarly, there’s a perceptible rawness which lifts “Messing Around” past the status of an early Go-Go’s demo when Franz and McKee take on new-wave pop. With a pretty video and the right marketing strategy, it would have been a hit. “Golden Town,” meanwhile, with its distorted guitar set to full blast, could have been a hit in another era, the Alt-Rockin’ ’90s.

Franz and McKee are just as striking when they strip things down even further. “Love” repeats the same three notes for a bassline, keeps the same static beat, and has two, maybe three chords, and damnit, if it isn’t the best Breeders song not written by Kim or Kelly Deal. It’s a refrain you’ll hear yourself repeating on “We Don’t Believe It,” “I Want You,” and again on “Stranger by the Day.”

Eventually, and this time will come sooner than you think, you’ll stop comparing Super Wild Horses to The Breeders, The Raincoats, or modern girl groups like Vivian Girls and The Dum Dum Girls. The novelty of two women swapping instruments will wear off quickly, too. You’ll stop caring about talent, or a perceived lack thereof, gender, and who’s doing what in the underground and where they’re doing it. You’ll stop caring because these songs are too damn good.  9 out of 10 on The Rockometer.