The Rockometer: King of the Beach by Wavves 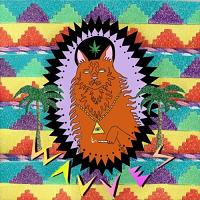 Before we get to King of the Beach, the second album by Nathan Williams and Wavves, let’s recap his career to date.  Hmm…on second thought, that would take too long.  So, let’s sum up.  Williams recorded some harsh sounding, lo-fi garage rock and noise rock songs in his bedroom.  A couple of them were rad.  The bulk of them weren’t.  Nevertheless, in a rush to find the next kinda big thing, Wavves became an overnight sensation (Thanks in no small part to gushing reviews by the underground press).  Next came semi-stardom, the backlash,  the oh so fantastic meltdown, and a highly publicized band beef with The Black Lips.  Williams had now gone from zero to hero and back to zero in a matter of months.

Now, perhaps sensing his window for indie-rock, semi-stardom was quickly closing, Williams made one clever and one not so clever move prior to recording King of the Beach.  First, he recruited Jay Reatard’s old rhythm section of Stephen Pope on bass and Billy Hayes on drums, a talented pair who could add some propulsion to his pop songs.  Then, he found a new trend to jump on.  Lo-fi is out.  Hello, pop-punk and chillwave.  Yes, you read that right.  Pop-punk and chillwave — Two styles of music which have very little in common, and two styles of music which in theory (And in practice) would make for a very incohesive listen.

On the pop-punk half of the record, you have songs like “Post Acid,” and the title track, “King of the Beach,” songs which wouldn’t sound terribly out of place on Epitaph, Lookout, or Fat Wreck Chords in the early-to-mid ’90s.  They’re simple, snappy, straightforward, and instantly likable with only scattered bits of tweaky weirdness to remind you, yes, these songs were indeed recorded during the 21st Century.  While on the chillwave half, Williams tries to prove his modern music bona fides by recreating the trippy, drippy psychedelic pop sounds of Animal Collective, essentially attempting to follow those who tried to follow Wavves on the ace Pitchfork review path to stardom.  It’s a move which comes off cold and calculated, and it’s a move which makes you wonder if Williams has a real voice, or whether he’s simply better than most at reading music blogs and gauging the whims of the underground.  Until he’s comfortable enough in himself to let his music loose without any of those trendy trappings, until he’s confident enough to let his songs and his rhythm section rip, there’s no choice but to side with the latter opinion.  5 out of 10 on The Rockometer.