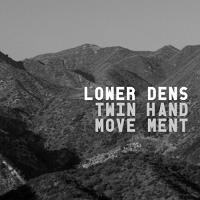 Once a card carrying member of the freak-folk movement, Jana Hunter has found both a new group in Baltimore’s Lower Dens and a comfortable new sound on her band’s debut album, Twin Hand Movement.  And while that new sound,  the mid-point between shoegazer rock and dream pop, may not seem like a logical progression for an artist who valued freedom from structure, Hunter carries a sense of exploration not only in the phrasing and control of her husky voice but also in the way her band obsessively controls the tone and texture of their guitars.

For example, consider the slow and careful, cracking scales of “Tea Lights, ” and the exquisite dynamics of “A Dog’s Dick,” where ragged guitars blasted front and center, a smooth bass line, intricately picked chords, and raw feedback all have their own place.  Or, check out “I Get Nervous,” a track which can mesmerize and usher with its pulsating and wavering guitars in strict concert with Hunter’s silk-smooth voice.  Hunter herself, shines on “Truss Me,” a sultry, seductive ballad perfectly set for a dark and smoky jazz bar as glittery bits of guitar and a slight tap from the drums serve as her only accompaniment.

Twin Hand Movement is not always so stunning — “Holy Water” is underdeveloped as an instrumental track and the languid tempo of “Plastic & Powder,” may share Lower Dens’ probing outlook on dream pop, but it’s the one number where their methodology fails to yield any payoff for the listener.  These moments are rare, however, and ultimately do little to diminish the band’s biggest accomplishment on this, their debut album — Breathing new life into two genres (Dream Pop and Shoegaze) which in modern times often consist of no more than a band lazily copying the styles of those influential bands from which they came.  7 out of 10 on The Rockometer.