“Paul Blart and the Death of Art” by Herzog 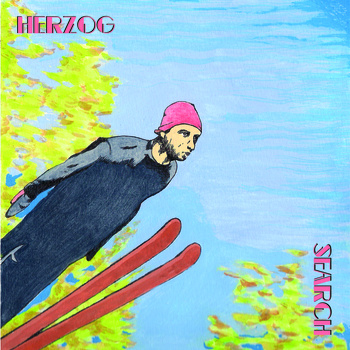 For those familiar with the output of Cleveland musician, Nick Tolar, in Expecting Rain, the work of his new band Herzog,  may arrive as a bit of a surprise.  Gone are the easy-rocking sounds of West Coast psychedelic pop and those carefully constructed arrangements.  Gone are the wistful memories and the never ending daydreams.  In their place are guitars, lots and lots of guitars, loud fuzzy, buzzing guitars screeching like it’s 1993 all over again.  This change of direction, however sudden it may seem to you, the listener, seems all but natural for Tolar, and the other members of Herzog (Dan Price, Brian Hall, and Dave McHenry).  Price and Hall both played with Tolar in Expecting Rain, giving the band a leg up on most newcomers.  Plus, one can’t discount Tolar’s talent as a songwriter.  Whether he’s penning an album to Saint Cecilia, the patron saint of musicians, as he did with Expecting Rain, or lamenting Kevin James’  shameful Paul Blart Mall Cop, here on Herzog’s “Paul Blart and the Death of Art,” he does so with an inescapable sense of melody.

MP3: Herzog – Paul Blart and the Death of Art

Herzog’s record release show will take place  Friday, September 10th at the Happy Dog.  For those not interested in vinyl or live music (And shame on those), you can download Herzog’s debut album now for a modest fee via the band’s page on Bandcamp.