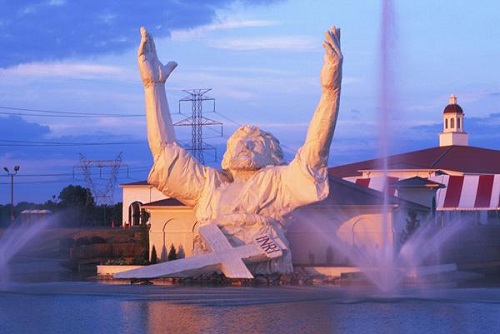 In an interview published on Ithaca Underground, Michael Baranick, aka Mikey Machine, described the intensely throbbing, bass and drum sound of his new band Megachurch as Christian stoner-metal made by people who are neither Christians nor stoners. It’s such a departure from speedy, sanguine pop of his former band, Machine Go Boom, that it renders his previous output hardly worth a mention.  Instead, if you’re looking for references, one should consider bands like the influential, instru-metal band Pelican, on Southern Lord, or the bass-heavy chaos of Lightning Bolt, for whom Megachurch opened on a recent Cleveland date, or even the early Nineties  industrial output of Ministry. This is heavy, heady stuff, with song titles and imagery meant to provoke (“More Mormon Than Mormon,” “The Gay Agenda,” and “The Second Coming”) and riffs that will rattle you straight to your immortal soul.  Or, it might just save your immortal soul, as is the case with “Exorcism.”  If any riff could lift a demon out of a human host, it’s somewhere in this cut’s four minutes of fury.