The Rockometer: Search by Herzog 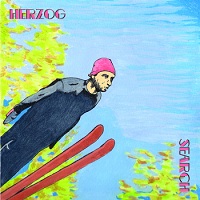 In an interview with John Benson for Cleveland.com, Herzog’s Nick Tolar plainly described the new album by his band, Herzog, as “Just rock.”  Others, seem to like the label slacker rock.  And, Tolar’s cool with that, too.  To hear him recount the band’s genesis, Herzog came about because he wanted to write and record the type of guitar rock album he had wanted to make for the better part of a decade.

Accordingly, you’ll hear bits and pieces of slacker rock gods, Pavement, and bands like Built to Spill and Weezer throughout Herzog’s debut album, Search.  Yet, what sets Herzog apart from any other band mining for indie rock gold sounds, is that thing Tolar did when he wasn’t making this album.  Namely, those years he spent fine-tuning his craft in laid back, psycedelic pop outfit, Expecting Rain,  as well as the time he put in with one of the earlier incarnations of The Dreadful Yawns.

For you see, every moment of ragged, jagged slop-rock goodness (See “Silence,” and “Paul Blart and the Death of Art”) is countered with something decidedly less frenetic, like “West Blvd,” Tolar’s minimally adorned, quiet and plaintive ode to the neighborhood of his youth.  There’s the scorching, static-ravaged anthem, “Town to Town,” finely balanced by “Abandon Love,” a cleanly picked, folk-song, written in the style of Dylan and sung with smooth clarity.  Then, you have a song like, “Living Alone,” a track which could have very well come from The Flaming Lips’ quirky, cranking psychedelic rock phase, and its counterweight in the glimmering and reflective, country rock of “Slowest Romance.”

Now, it’s awfully hard to label Herzog as a slacker rock band.  There’s simply too much else going on here and too much talent.  Similarly, Tolar’s own description of “Just rock,” is a disservice, too.  Your neighborhood, just-a-rock band, can’t turn on and off the ampage and display the type of grace Tolar displays on Search’s quieter moments.  Instead, let’s forego all genre specific labels, and acknowledge Search for what it is: A sometimes rockin’, other times downtrodden, but always engaging album not only worth your money and your time, but also an album worthy of high praise.  9 out of 10 on The Rockometer.