The Rockometer: Majesty Shredding by Superchunk 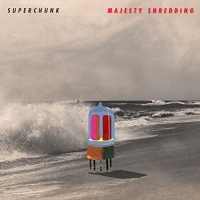 Majesty Shredding, the ninth album by Chapel Hill’s Superchunk, is the iconic indie-rock band almost exactly as you remember them back from the days of burgeoning American DIY scene and albums like ’91s No Pocky for Kitty and ’93s Mower.  The agitated, guitar pop of “Digging for Something,” and “My Gap Feels Weird,”  with vocalist/guitarist Mac McCaughan straining and screaming like a much younger man over piercing melodies more apt for much younger ears, draws a direct line between Merge Records, the self-made label for many of the band’s early releases, and Merge Records, the modern-day home of indie A-listers Spoon and The Arcade Fire.  Accordingly, as they sonically place themselves in the mindset of twenty-somethings taking on the world,  there is a maturity found here which wasn’t present in those recordings.  The band no longer has to scrap every bit of success.  Every setback in McCaughan’s life is no longer a soul-shattering event.  While “Crossed Wires,” may be a bad mood set to song, there’s a level of maturity and ownership here, one which was lacking in a song like “Hyper Enough” from ’95s Here Where the Strings Come In.  It’s the difference between saying I know I’m f*cked today, so you best be careful around me and why am I s0 f*cked today and why are you still bothering me?  Or, as McCaughan explains his new, healthy emotional self on the flipside’s standout cut, “Learned to Surf,” “When I learned to talk/Humans roamed the earth/I can’t hold my breath anymore/I stopped sinking and learned to surf.”  7 out of 10 on the Rockometer.

MP3: Superchunk – Digging for Something

VIDEO: Superchunk – Digging for Something