Warning: "continue" targeting switch is equivalent to "break". Did you mean to use "continue 2"? in /nfs/c06/h01/mnt/88637/domains/blog.irockcleveland.com/html/wp-includes/pomo/plural-forms.php on line 210
 I Rock Cleveland I Rock Cleveland | The Rockometer: Wilderness Heart by Black Mountain 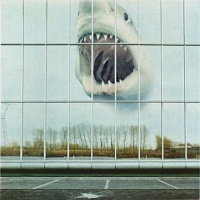 For a band like Vancouver, longhaired throwback rockers, Black Mountain, there was really no where to go after their monolithic 2008, release, In the Future.  They couldn’t craft fiercer guitar riffs; They couldn’t make these keyboards any creepier; They couldn’t coax any more emotion out of dual vocalists Stephen McBean and Amber Weber; They couldn’t push, pull, and shred the limits of prog, metal, and psychedelic rock any more without running the real risk of becoming a caricature of themselves.  Hence, its follow-up, the just released Wilderness Heart, is a deliberate attempt to rein in the excesses of In the Future (Sorry, this means no 16 minute shred-fests), while not seceding too much power. “Let Spirits Ride,” for example, pairs boogie-rock rhythms with blazing, speed-rock riffs, aligning the band more closely with the Motorhead school of rock than the stoner-rock class.  “Rollercoaster,” meanwhile, finds them as dark, doomy, and sludgy as they’ve ever been, and still, they manage keep things around the five minute mark.

Yet, too often during Wilderness Heart, when Black Mountain streamline their sound, they end up losing those things which made them distinct.  When they do heavy, as on “Old Fangs” and “Let Spirits Ride,” they do heavy no better or no worse than Deep Purple, Monster Magnet, or any other modern, space-truckin’, riff-rock band.  When, they turn the knobs down a bit, as on “The Hair Song,” they sound too much like Led Zeppelin light.  Surprisingly, the only time Black Mountain sound like Black Mountain, is when they turn everything way down for a few folksy turns on “Buried by The Blues,” “Radiant Heart,” and “The Space of Your Mind.”  The pairing of the gruff-voiced McBean with the siren-like Weber, is something which works wonderfully in any setting, especially when things are stripped down.  And, more importantly, it’s something distinctly Black Mountain, something which they can hold on to during an album they had to make, while they take the time to find the one they need to make.   6 out of 10 on The Rockometer.