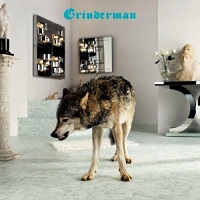 Writing for The Onion’s AV Club, Sam O’Neal attempts to discern the difference between Nick Cave’s Grinderman and his longstanding band, The Bad Seeds with this snappy opening, “In The Bad Seeds, Nick Cave thinks with his brain; in Grinderman, he thinks with his dick. After all, why bother with gothic-romantic gilding when you can charm pants off with a punchline like ‘My baby calls me the Loch Ness monster / Two great big humps and then I’m gone.'” It’s a line which works as an eye-catching one-liner, but in describing the persona Cave has created around Grinderman it falls a bit short. If Grinderman is indeed Cave speaking through his dick, than his dick is bigger, badder, better-looking, and better read than all of us.

Instead, think of Grinderman as a superman in the philosophical sense; A man who lives beyond religion and morals; A man whose existence is beyond that of a common man. The grinderman also has an insatiable lust, and an animal-like thirst for blood, both of which arise during times of agitation. This is where he gets his many kicks. And, when the Grinderman gets his kicks, it’s for all our benefit. Witness the mad jazz-like spasms of guitar, bass, drums and electric bazouki all going off during, “Mickey Mouse and the Goodbye Man,” with Cave’s unhinged, wolfman howl providing the punctuation mark. Or, take in the mix of sex, passion and the ominous banging of “Worm Tamer,” and the sinister, almost sadistic groove of “Heathen Child,” then, the bastardized and brutalized, bluesman’s wail of “Evil,” and this Grinderman earns his status above every man.

Still, as thrilling as Nick Cave Grinderman can be when they’re at their fearsome, primal best, it’s those moments of vulnerability which make Grinderman 2, the album, stand clearly above Grinderman’s first outing. More comfortable in this pared down band, Cave, Warren Ellis, Martyn Casesy, and Jim Sclavunos do more than soundtrack the instincts of a godless man with crazed Rock ‘N’ Roll recordings. “What I Know,” uses but the barest of spectral noises, a gently played acoustic guitar, and a solitary drum beat to back Cave’s laments, “Thank God we don’t get all our hurts at once…Thank God we don’t get all our olds at one time.” Later, piano, a bouncy bass rhythm, Cave’s touching croon, and a surplus of smooth ooh-oohs provide the setting for “Palaces of Montezuma,” a love song which all but obscures the narrator’s devilish intentions. Without the lyrics sheet, a line as gruesome as, “The spinal cord or JFK/Wrapped in Marilyn Monroe’s negligee/I Give to you,” gets lost amongst promises of sweeter sounding things.

At this point it would be easier to characterize Nick Cave’s Grinderman as a godless man, wolfman, or a sex-obsessed superman. These songs go deeper. Cave and his band are reawakened, both spiritually and musically. To say Grinderman is but one of these things is to miss the point that Grinderman 2 is everything a rock album should be: Thought both provoking and scurrilous, ravaging and delicate, an intelligent mix drawing from diverse cultural and musical backgrounds, and sex. We can’t forget the sex.  10 out of 10 on The Rockometer.