The Rockometer: Phosphene Dream by The Black Angels 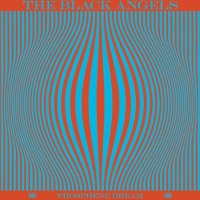 Through their first two albums (Passover and Directions to See a Ghost) The Black Angels have always had that sound down.  It was a mix of experimental drone and blistering, bluesy guitars, buttressed by heavily thumping drums.  It was a sound that could be both mesmerizing and exhilarating, often in the same song.  Yet, as Directions to See a Ghost saw that sound spread over three LPs with multiple songs running close to or over the five-minute mark, some began to wonder if they were anything other than that signature sound.

Now, with Phosphene Dream, the Austin, Texas psychedelic rock band seem intent on proving their detractors wrong.  Not only can they ably follow in the footsteps of the Velvets and The Thirteenth Floor Elevators, and keep their beloved drone, but they can write honest to goodness songs, too.  Numbers like “Haunting at 1300 McKinley,”  and “Telephone,” bring in a go-go vibe into the mix, all big hair, boots, and brightly colored polyester dresses.  While “Sunday Afternoon,” and “Yellow Elevator #2,” add in elements of British Invasion pop.  The latter, in particular, evokes The Beatles around the time of Magical Mystery Tour.

Yet, as many band before them can attest, ably pulling off the third-album-let’s-switch-things-up-a-bit act is no small feat.  Especially during their live sets leading up to Phosphene Dream’s release,  The Black Angels had a difficult time working those new elements into their existing catalog.  You can’t just go all go-go after eight minutes of throbbing darkness and not leave some in the crowd behind.  So, even when The Black Angels do tune in and drone out, as they do on “Entrance Song,” and “True Believers,” they wisely keep things more concise than they have in the past.  Alternately, on tracks like “Bad Vibrations” and “River of Blood,” the band push and pull the tempo, working those riff-rocketing guitars into a frenzy, again, smartly laying the framework for those numbers which wouldn’t have fit the notion as a Black Angels song.  Ultimately, this combination of old and new (old) sounds alike, could very well make Phosphene Dream one the band’s best.  And if it’s not, then at the very least, their ever widening inspirations and rapidly developing songwriting skills have successfully set them up for the next big one.    8 out of 10 on The Rockometer.