The Rockometer: Everything in Between by No Age 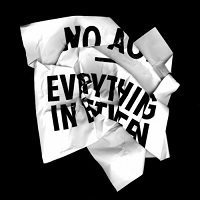 No Age
Everything in Between
Sub Pop

Hello, No Age.  It’s me Bill.  Can I call you No Age?  Or, would you prefer Dean and Randy, or Mr. Spunt and Mr. Randall?  Let’s go with No Age.  So, No Age, here’s my problem.  I’m a big fan of yours, but when you released two versions of your latest single, “Glitter,” on vinyl with different B-sides on the 7″ and 12″, I was forced with a decision to make — Buy one, or the other, or both.  Times are still tough here in America, especially in Ohio, so buying both was out of the question.  I went with the 12″, grumbled something to the record clerk about commercialism, something about writing the band a letter, and moved on.  Then, your record, Everything in Between, was released with deluxe packaging and a 48-page booklet.  I get it.  You’re artists.  I got your record for $24, looked at the art once or twice while I played the single LP, and again, said, “I’m going to write the band a letter.”    So, here it is:

Dudes, I mean No Age:

$24 for an LP is outrageous. Don’t you remember your roots in the LA punk scene?  Don’t you remember The Smell?  Would someone who played a place called The Smell, sell a record for such a price?  Sure, the record sounds all right — I dig the touches of UK new-wave added to tracks like “Glitter,” that bass melody is so New Order and so rules.  Other times, I wish there was a little more Sonic Youth and a little less Ramones in the mix, but that’s a minor quibble.  You still do noise punk like few others.  It’s all about the $24 for one LP (And the two versions of the same single, and the tight economic times, etc), meaning I can’t, in good conscience, recommend your record.

No Age’s Everything in Between is a 5 out of 10 on The Rockometer.