The Rockometer: Year of the Ox by Fucked Up 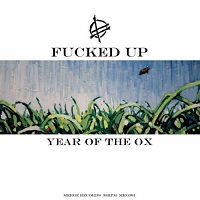 Fucked Up
Year of the Ox
Merge Records

Much like the Clash some 30 years before them,  punk rock is just a starting point used to explore other forms of popular music for the post-hardcore band, Fucked Up.  Tune into one of the Chinese Zodiac singles (Year of the Dog, Year of the Pig, and Year of the Rat, being the first three), or The Chemistry of Common Life, the most recent full-length by these Toronto rockers, and you’ll get plenty of haggard growls, courtesy of lead screamer, Damian Abraham, plenty of guitars (Fucked Up have this thing where they use guitar track atop guitar track atop guitar track times ten), forays into kraut-rock, progressive rock, and psychedelic rock, as well as the old occasional, 1-2-3-4, let’s go.   Year of the Ox is no exception.  The A-side features thirteen minutes of propulsive hardcore — Chugging, hypnotic bass melodies, anxious, syncopated drumming, and shards of fractured guitar, all building to dramatic, orchestral apex one would expect from a band like The Arcade Fire or Godspeed You Black Emperor.   While the eleven-minute, B-side, “Solomon’s Song,” fuses hardcore with a space-disco beat and a countless number of guitar tracks glimmering, spinning, pulsating, and otherwise filling every available amount of open space.  Yet, rather than build to that grand statement, it retreats with a five-minute jazz saxophone suite, keeping only the barest beat and adding but the occasional electronic accompaniment.   Rarely, if ever, can a five-minute saxophone solo be considered essential, but in the hands of Fucked Up, and in the context of this single, it is. Such is their exceptional talent.  9 out of 10 on The Rockometer.