The Rockometer: First Blood by Nobunny 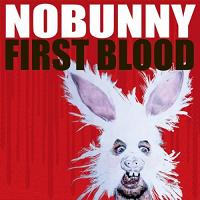 Some amateur psycho-analysis of Justin Champlin, the man better known as Nobunny, would reveal a performer unsure of his own talents, hiding behind that ratty bunny mask and dressing up in ridiculous garb in order to draw attention away from his actual craft — songwriting. Some professional rock analysis reveals something quite different — A man well versed in everything from doo-wop to garage rock, from punk rock to power pop and glam. When the two disciplines meet, in a method we’ll call it psycho-rock analysis, we find a man who’s unafraid to kick off a record with an homage to Happy Days or end an album with carnival fare (“I Was on (The Bozo Show).”)  He has no problem discussing his solo sex life (“(Do The) F*ck Yourself.”) He’ll throw a kazoo in the middle of a power pop anthem (“Gone for Good”) , do some tin pan alley (“Pretty Please Me,”), then do the best T-Rex by a band not named T-Rex (“Breathe”). It’s a lot of tomfoolery for one album, to be sure. Yet, without the tomfoolery, Champlin wouldn’t be Nobunny and Nobunny wouldn’t be so much fun. 7 out of 10 on The Rockometer.