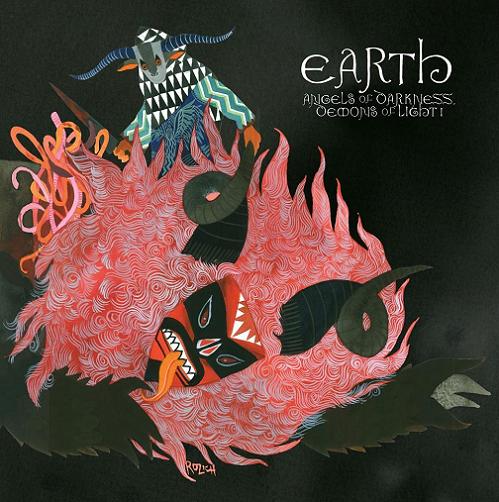 Patient, ominous, heavy, evocative, totally f*ckin’ rad — All of the adjectives which have been used to describe the latter day output of guitarist Dylan Carson, and the work of his pioneering doom-metal band Earth, are also apt here.  “Father Midnight,” is the first track to be released from their forthcoming album on Southern Lord records, and it builds on the slow-motion, American West soundscapes heard on the albums Hex, Hibernaculum, and The Bees Made Honey in the Lion’s Skull.  Although the running time stretches over 12 minutes, in effect, it reaches toward infinity.  The guitar riffs are deep and deliberate and recur in slight variations throughout the track.  While the rhythm section is similarly paced and heavy in all the right spots.  Listen closely, however, and there’s more to “Father Midnight,” than one melody stretched beyond time.  Cellist, Lori Goldston, deftly piles on the creep with achingly somber tones complementing, but never covering, the omnipresent hum of slight feedback.  The deviation she provides may be slight, but it’s wholly necessary.  Consider it the difference between being stuck in time, and being a steady observer of time as it morphs from one minute to the next.

Earth’s Angels of Darkness, Demons of Light (That’s the rad cover art up on top), will be out February 15th on Southern Lord Records. NPR will be streaming it in its entirety beginning January 31st.