The Rockometer: Party Store by The Dirtbombs 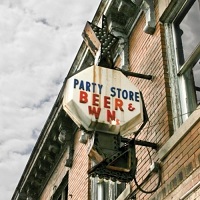 The Dirtbombs
Party Store
In the Red

To say The Dirtbombs massive 3XLP release Party Store is ambitious is an understatement.  Here’s one of Detroit’s most-acclaimed garage-rock bands taking on six sides of classic Motor City Techno by the likes of Kevin Saunderson, Juan Atkins, Derrick May, and Carl Craig (Who, by the way also contributes on this album) and they give these songs the same kind of gritty, urban treatment as the classic soul, funk and R’N’B tracks heard on 2001’s Ultraglide in Black.  To be clear, this is not an album of techno-rock hybrids or big beat electronics crafted for the Pabst crowd.  Rather, these are dance tracks reimagined by a talented group of Rock ‘N’ Rollers who experienced and admire Detroit’s electronic music legacy.  And, for the most part, their plan of attack works astonishingly well.  When piercing blasts of guitar and frontman Mick Collins’ deep, soulful voice are married to precise four-four beat,  Atkins’ “Cosmic Cars” and “Alleys of Your Mind” become downright diabolical.  Similarly, when The Dirtbombs are done with “Sharevari,” the high life portrayed in its grinding and seductive disco transforms itself into a banger also fit for those who prefer their High Life in a bottle.   Collins and company only run into trouble when they take the album’s concept too far, as on Carl Craig’s “Bug in the Bass Bin.”  Its 21 minutes of low-key electronics and guitar noodling would be enough to sap the savage energy out of their notorious live show, and not surprisingly, it kills the massive groove which otherwise abounds on Party Store.  Really, a six or seven minute edit would have sufficed — The Dirtbombs would still have had their chance to display their depth of knowledge by taking on this leftfield track; The party people would get their party timeout; And, this great album with one obvious flaw, would have been just plain great.  8 out of 10 on The Rockometer.