The Rockemeter: Hardcore Will Never Die, But You Will by Mogwai 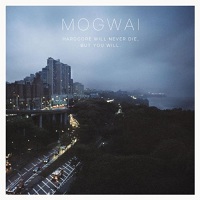 Mogwai
Hardcore Will Never Die, But You Will
Sub Pop

After the release of 2010’s live album, Special Moves, it appeared Mogwai had regained their epic groove.  Fifteen years into their career, the Scottish titans of instrumental rock were once again raging eardrums with crunching and catastrophic melodies using a mix of both older material and new.  It was enough to make one forget for the better half of the past decade they had been stuck in a serious mid-career rut, seemingly incapable of reaching the highs found on earlier albums Come On Die Young (1997), Young Team (1999), and Happy Songs for Happy People (2003).  Another positive sign coming into the band’s seventh studio album, was the title of the album itself — Hardcore Will Never Die, But You Will.  Without out even hearing a lick, it seemed to indicate a band with one intent, and that intent was to rip. To drive that point home, like a jackhammer in the guts of your ears, Mogwai kick off the album with “White Noise.” Um, let’s try that again. To drive that point home, like you are right there on the stage, protection free, in the middle of a six stack, your guts quaking, the band included on this, their most massive effort to date an auto-tuned pop-song, “George Square Thatcher Death Party.” Ok, let’s give this thing one more try to get it right. To drive that point home, that Mogwai, the band whose loudness is so overwhelming they can reduce the meek to tears, delivered a set of songs so epic the word epic found itself to be inept in describing something so epic. From the krautrock inspired, “Mexican Death Race,” to the post-punk aggression of “San Pedro” and on to a bunch of melodies you swear you’ve heard on other Mogwai albums… Do you see the problem here? Fifteen years in and Mogwai are struggling to find a way to keep their sound fresh. Songs like “Rano Pano,” “Death Rays,” and “Letters to the Metro,” pleasant instrumentals which would have been perfectly serviceable in the past when nestled in between more engaging fare, feel like retreads. To drive that point home, “George Square Thatcher Death Party,” that auto-tuned pop song which borrows its vocal stylings from f’n Cher, of all people, borrows it’s melody from an earlier Mogwai song, “Mogwai Fear Satan.” Now, “Mogwai Fear Satan,” that was a time when this band was something to revere. That song was epic, 16 minutes of epic like the word epic couldn’t describe. 5 out of 10 on The Rockometer.