Warning: "continue" targeting switch is equivalent to "break". Did you mean to use "continue 2"? in /nfs/c06/h01/mnt/88637/domains/blog.irockcleveland.com/html/wp-includes/pomo/plural-forms.php on line 210
 I Rock Cleveland I Rock Cleveland | The Rockometer: Yuck 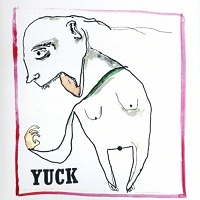 Think Superchunk, Dinosaur, Jr and Ash.  Think Sloan, Yo La Tengo and Teenage Fanclub, or any number of 120-Minute staples whom at one time or another paired their pop songs with a sick stack of amps and said, “This is right.” That’s the self-titled, debut record by Yuck, a New Jersey/London/Hiroshima band, whose aim is to bring back the sounds of ’90s alt-rock radio in a big, big way.  Whether it’s the Chapel Hill inspired buzz of “Georgia” and “The Wall,” or “Holing Out,” a gem of a power pop number rousing with the swirl, screech, and squawk of amps teetering on overload, this is a band who know how to strike the right balance between noise and melody.  It’s an accord they maintain throughout the course of the album, as well.   Come-downs like, “Sunday,” where the absence of racket and static reveal harmony and deliberate, cleanly strummed guitars, and “Suck,” a number which gets by on little more than a whisper and a well-placed slide guitar, ensure that when the rugged grunge and arena-rock ecstasy of “Operation” hits it isn’t lost within one continuous din.  Rather, it stands out as one of many tracks which would have been hits on radio or MTV during an earlier era.  Ultimately, it’s that exact abundance of quality which makes Yuck’s debut more than the sum of its influences.  For whether you want to admit it or not, your ’90s rock idols did have some duds in their back catalog.  Yuck, on the other hand, with both the benefit of youth and the knowledge to never let a swarming riff get in the way of a gifted melody, gets each number on its debut ragged, clanging, banging right .  9 out of 10 on The Rockometer.