The Rockometer: Smoke Ring for My Halo by Kurt Vile 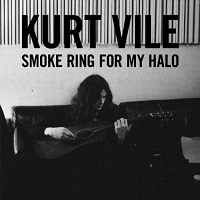 When Kurt Vile sings of never wanting to leave his couch, or sipping soup straight from the can, in his now trademark half-grumbled, partly-mumbled drawl, he sounds like a slacker archetype, a man kinda, sorta engaged with life.  Don’t believe this front for one second.  Despite his nonchalance, Vile’s Smoke Ring for My Halo, his second full-length release for Matador Records, is an album where every element — A picked guitar, a well-timed beat, and radiant electronics are all flawlessly incorporated into a dense and complex, but surprisingly airy mix.

Consequently, it hardly matters that there isn’t one moment of unobstructed bombast in the set.  When Vile slings a big, bluesy lascivious guitar riff, one fit for Clapton, himself, on “Puppet to the Man,” it’s neither extravagant nor cheesy.  By framing it with second and third guitar tracks, and a brutish, pounding beat, it remains grounded, like a working class rocker who’s simply stumbled upon a showier soul.

Vile’s songwriting is more confident, too.  His folkier numbers no longer come off like rambling ruminations of a man without a plan.  Carefully stacked guitar tracks, violin, harp, and those brightly beaming keyboards all lend to a beautiful sense of wonder, one which faithfully compliments his wandering spirit.  The tenderness of “Baby’s Arms,” cannot be denied.   However, ignore the lyrics to “Society Is My Friend,” and you’d never guess society isn’t some chum, but one really bad mf’er.

Later, “Ghost Town” eases along with such grace and gentleness, it’s all too easy to look past its undeniable craft.  Vile slides and shuffles.  Tones shift in and out of focus, as his expanded band of musicians casually enter and leave the mix.  Ultimately, as the track winds down, and the players peel away, Vile is deserted with his lonesome voice and his old guitar his only companions, serving reminder not only where Vile came from — One man with a semi-coherent vision with sometimes engaging tracks to match, but also where he is now — A real talent, all the better off for those who played their part in making Smoke Ring for My Halo an engaging and remarkable work.  9 out of 10 on The Rockometer.