The Rockometer: Constant Future by Parts and Labor 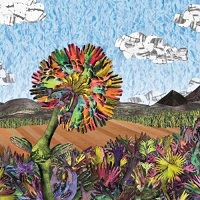 With the release of Mapmaker in 2007, the Brooklyn band Parts and Labor, found themselves at the perfect intersection of punk rock and electronic music.  Their sound was neither caustic, like digital hardcore pioneers, Atari Teenage Riot, nor was it the stuff of fluff, like mainstream rockers, Linkin Park.  The songs were fast and anthemic.  The guitars and electronics of Dan Friel and BJ Warshaw were always on the brink of haywire.  And, the drumming by Chris Weingarten was not only powerful enough to support their skyward melodies, but also, rapid, technical and precise.

When Weingarten left the band, and Parts and Labor regrouped with a third instrumentalist and a new drummer, a minor letdown, like their follow up album, Receivers, was all but assured.  Instead of trying to replicate the mania of their earlier work, they went for a slower, denser, more controlled sound, and lost their edge in the process.

Looking for that lost spark, the refocused unit are back down to a trio, with Joe Wong on drums, back with a new album, Constant Future, on Jagjaguwar Records, and most importantly, Parts and Labor are back, period.  Songs like the title track, “Constant Future,” and “Echo Chamber,” pair thick, muscular drum beats with throbbing, electronics and blithely chattering keyboard melodies, within the structure of three minute, verse-chorus-verse, rock.  The results are familiar enough to provide the underground listener with a quick reference point, yet, still forward-facing — One can get lost attempting to follow every odd squeak and every unexpected squelch manufactured by Friel and Warshaw.

“Pure Annhilation” and “Without a Seed,” meanwhile, borrow their marching rhythms from working-class street punk, evoking a scene where techies, and all their blinking, buzzing, vibrating gear, are now walking, interlocked in solidarity.  It’s a union the band embrace throughout the album.   Where Mapmaker’s chaotic maze of wires, boxes and pedals fashioned unlikely anthems out of the competition between man and machine, Constant Future, with its more robust low-end, forges similar high-points  by coaxing those two sides to work together in noisy, bustling, beeping concert. 8 out of 10 on The Rockometer.