The Rockometer: Angels of Darkness, Demons of Light by Earth 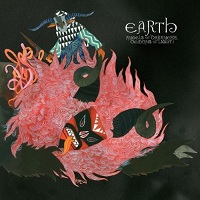 Once regarded as a showcase for guitarist Dylan Carson’s overwhelmingly heavy guitar rumblings, Earth are now, more than ever, a band where each member pulls their weight.  The melodies of these five instrumental tracks, collected here on Angels of Darkness, Demons of Light 1, are just as likely to be carried by Karl Blau’s deliberate, reverberating bass, or cellist, Lisa Goldston’s ever-mournful strings, as they are by Carson’s evenly-paced guitar.  There are even times when Carson is silent, an unthinkable development when you consider the all-encompassing drones of his early work.  Yet, whatever Earth has lost in volume or heft over the years, Carson and company more than make up for it with expression.  With a tempo barely moving beyond dead, and an ever-present feeling of dread, studiously executed notes on guitar, on bass, and violin stray, then return, to a basic melody on “Father Midnight.”  Every bend of the string, every touch of the instrument is savored.  “Descent to the Zenith,” meanwhile, takes the band’s slow-motion study of American roots music into even deeper realms, aided in no small part by Goldston’s billowing cello.  Later, on the title track, the quartet employ a style and structure similar to the early ambient work of Brian Eno as Carson and Blau trade a short series of notes, one starting as the other trails.  Each tone is golden and vibrant.  It’s minutes before the first drum beat is heard from Adrienne Davies, and minutes more before one realizes Goldston is overlapping with a similar melody.  Far from joyless, music this precise in its execution, so intricately detailed, and so darkly beautiful must excite.  And if it doesn’t, try a different speed, one uncommonly free of distraction, and one open to transcendence, then you will surely see its radiance, too.  9 out of 10 on The Rockometer.