The Rockometer: Angles by The Strokes 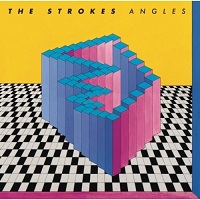 As a comeback single, The Strokes first in nearly five years, “Under Cover of Darkness,” is a shining example of everything the New York City five-piece does well.  It’s a more melodic interpretation of ’70s NYC punk mixed with the working class sensibilities of Thin Lizzy.  Guitarists Albert Hammond, Jr and Nick Valensi trade short, sharp stabs, longer, clashing notes, and later find room for an ecstatic arena rock riff.  The bass, meanwhile, is big and round and grooves.  It all leads to an rousing monster of a chorus where vocalist Julian Casablancas alternates between a free and easy croon and palpable agitation.  This is easily the band’s best single to date.

As a comeback album, Angles, is something quite different.  All five members, including bassist Nicolai Fraiture and drummer, Fab Moretti, contributed as songwriters.  Yet, at no point during the album’s recording process were all five Strokes actually in the same room at the same time.  As a result, Angles, sounds like an album where parts were mailed in and unrelated verses and choruses were pieced together; An album where no one had the gall to say, “No more electro and no more geeking out on your guitar.  That song’s a b-side and that one’s rubbish.”

Take, “Two Kinds of Happiness,” for example, a new-wave inspired track where Fraiture’s bass and Moretti’s drumming hint at the darker, dance-pop of New Order.  The guitars and vocals, on the other hand, go in a poppier direction, like that of Ric Ocasek and The Cars.  The chorus is a third disjointed piece with Casablancas emoting like Bono and Hammond and Valenti playing speedy, prog-metal riffs.  It’s a mess.

Then, there’s “Machu Pichu” and “Games” where during the verses the band unconvincingly dabbles in the electro and world-beat made popular by another NYC band who’ve had to fend off accusations of being more style than substance, Vampire Weekend.  “Metabolism” goes off on yet another tangent with dramatic space-rock and prog-rock, guitar excess.

Only occasionally, does this non-collaborative approach to being in a band work.  On “Taken For a Fool,” the group’s electro, dance-punk fixation pays off, when a robotic verse smoothly transitions to a more traditional rock chorus, effectively showing what Angles could have been if everyone in the band had been actively engaged.  And, “Gratification,” succeeds because it’s The Strokes simply being The Strokes.  There’s no attempt to redefine the sound here — Just that tested blend of mid-’70s punk and glam.

Let’s give the band some credit.  The easy path would have been to fill Angles with ten takes on their debut album, Is This It.  The fans would have lapped it up and they would have been critical, if not commercial successes, again.  Instead, they took the more difficult road, incorporating foreign elements into their sound, opting to use their first new album in five years as a chance to experiment and expand upon what it is to be The Strokes.   Too bad all five Strokes didn’t have the same vision and couldn’t be bothered to share their unique visions with each other.  5 out of 10 on The Rockometer.

VIDEO: The Strokes – Under Cover of Darkness