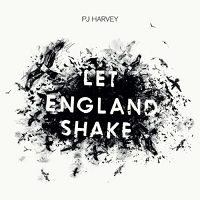 At its core, Let England Shake, the tenth album by English singer-songwriter PJ Harvey, is a protest album in the grand folk tradition.  Blunt and brutal imagery is used throughout as she condemns the mental and physical toll of war  (WWI, Iraq, and more broadly, human conflict, in general) and the misguided exceptionalism of the men who started those wars.  However, once you put aside the lyric sheet, you are transported to a land brimming with uncommon delight — The glittering guitar on “The Glorious Land,” and the operatic vocals on “On Battleship Hill,” are so stark they effectively mask the count of dead, deformed, and orphaned quickly accumulating during the narration of these twelve, dire tracks.  This same duality makes that dirty old town depicted in “The Last Living Rose,” a home worth longing for, and enables “Hanging in the Wire,” a duet with long-time collaborator, Mick Harvey, with its warm keyboard tones and quietly assured vocals, to hide its gruesome scene of unburied soldiers.  Without its light music, Hanging in the Wire,” and Let England Shake, as a whole, would be too much for any man to take.  With its complex soul in tact, however, it offers a sense of hope rarely paired with such grim scenes (Maybe we aren’t cursed to repeat the mistakes of our fathers), and presents itself as an album of such wonder that it can only be deemed as a work of greatness.  9 out of 10 on The Rockometer.