The Rockometer: Belong by The Pains of Being Pure at Heart 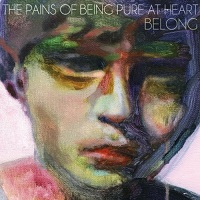 The Pains of Being Pure at Heart
Belong
Slumberland

If the cleaner, bolder, alt-rockin’ sound of Belong, the new album by the one-time twee, Pains of Being Pure at Heart, catches you off guard, I suggest going back over those liner-notes.  In it you’ll find Belong was produced and mixed by the tandem of Flood and Alan Moulder, a duo who worked with some of the biggest alternative bands in the late ’80s and ’90s, including the likes of U2, Depeche Mode, Nine Inch Nails, Smashing Pumpkins and The Jesus and Mary Chain.   Flood and Moulder don’t do twee.  They do hits.  So, again, don’t be surprised when Belong is essentially ten attempts at scoring an alt-rock hit.  The guitars on “Belong” are big enough for the Pumpkins’ Billy Corgan and it follows that soft-loud-soft pattern so prevalent in the ’90s, too.  While, the keyboards on “My Terrible Friend” and “Heart in Your Heartbreak” have a distinct Disintegration feel to them, like they were salvaged from the very studio where The Cure recorded one of their most beloved albums.  Later, it’s the machine-like beat and fuzzy guitars which point directly to Honey’s Dead and The Jesus and Mary Chain.  Yes, Flood and Moulder went full on Alternative Nation in a bid to break The Pains of Being Pure at Heart.  Does it matter that in all these attempts at hits, they only come close and, then,  they always sound like someone else’s band?  If you’re concerned about authenticity, the answer is a resounding yes.  If you’re only looking for a forty-minute good time, then by all means, play Belong again and again.  And while you’re at it, cue up some Mary Chain and some Pumpkins.  Trust me, you’ll be in the mood.  6 out of 10 on The Rockometer.

VIDEO: The Pains of Being Pure at Heart – Heart in Your Heartbreak