The Rockometer: Nine Types of Light by TV on the Radio 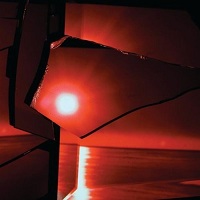 TV on the Radio
Nine Types of Light
Interscope Records

Depending on your point of view, Nine Types of Light is either the album where the innovative electronic/post punk band, TV On the Radio put it all together in one masterful pop statement, or the album where the Brooklynites have foregone the types of ground-breaking songs which defined their career and have gone soft.  Either way, there’s no denying the shift, on this, their fourth album.  The melodies are cleaner and more direct.  The harmonies led by vocalist Kyp Malone are more intuitive.  Dave Sitek’s techy production isn’t the focus of the album as much as it is a compliment to the other creative voices in the TV on the Radio camp.

This new found accessibility is best exemplified by “You,”, “Killer Crane” and “Will Do,” three ballads which anchor the center of the album.  With “You,” TV on the Radio follow the minimal soul and trip-hop of upstarts The XX, and expand it into a much fuller sound.  On “Killer Cranes,” meanwhile, Malone quietly and wistfully coos over a gently shifting melody whose lead alternates between viola, keys, flute and uke.  The unquestioned highlight of this bunch, however, is “Will Do.”  Here, Malone and the band go full-on neo-soul, with clean, metered beats, a serenade of keys and strings, and only the occasional guitar line appearing before the bridge.  Coincidentally, it’s in the brief bridge of “Will Do,” where you hear the kind of agitated electronics which once would have been a primary melody.

For all of its muted moments, Nine Types of Light isn’t entirely without get up and get on down, too.  “New Cannonball Blues” and “No Future Shock” both bring healthy samplings of funk to the mix and album closer “Caffeinated Consciousness” rocks that funk out.  Here, wrapped within a suite of masterfully streamlined pop songs, the listener is able to gain a greater appreciation of TV on the Radio’s genre bending, skill, something not always possible in the band’s back catalog.  Now, these tracks are able to properly stand out, as does Nine Types of Light as a whole.  9 out of 10 on the Rockometer.

VIDEO: TV on the Radio – Will Do