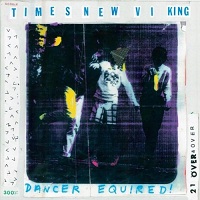 Underneath all the scuzz, fuzz, and lo-fi hiss, Columbus, Ohio’s Times New Viking have always been a pop band at heart.  Songs like “Natural Resources, I’ve Got Mine,” “Teenage Lust,” “Drop-Out,” and “My Head,” may have been obscured on record, but when these numbers  came out live, with much truer fidelity, they really popped.  With Dancer Equired, the trio’s first release for Merge Records, however, all of the mystery is gone.

To be clear, Adam Elliott (drums/vocals), Beth Murphy (keyboards/vocals) and  Jared Phillips (guitar) haven’t come completely clean.  Dancer Equired is endearingly ragged, in a classic kiwi-pop kind of way.  “Ever Falling in Love,” pleasantly employs a simple chord progression, overlapping vocals from Elliott and Murphy, and a measured beat, and “No Room to Live,” may be the band’s truest pop song to date.  Elliott and Murphy’s harmonies have never sounded better as they do here, when paired with muted keys and a jangly guitar melody.  “California Roll,” meanwhile, features a similarly, easy-going tempo, but with Phillips’ guitars fragmented and layered on top of each other.

This transition from basements and bedrooms into an honest-to-goodness recording studio isn’t without a hitch, however.  They run into problems when they kick the tempo and up the aggression.  Without a well-defined low-end, and without their lo-fi “studio” tricks to save them, songs like “Try Harder,” “New Vertical Dwellings,” and “Fuck Her Tears,” have no bite, and feel hollow and half-finished.  Consequently, whether intentional or not, Times New Viking have put themselves at a crossroads — They can go full on pop and dispense with the frazzle dazzle; They can invest in an instrument which provides more bump in the bass range; They can return to their lo-fi roots, but they can’t stay here.  6 out of 10 on The Rockometer.