The Rockometer: Sons of Stone by The Peoples Temple 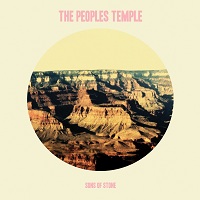 Yes, the comparisons to artists like Spacemen 3, The Sonics, The Rolling Stones, and The Brian Jonestown Massacre are immediate on The Peoples Temple debut LP, Sons of Stone.  The recording itself is thin, like a relic from the ’60s, but not without an abundance of guitar screech.  And, like the Brian Jonestown Massare, this Lansing, Michigan foursome also take their name from the same doomed cult of Jim Jones (Jonestown being the site of the cult’s mass suicide in Guyana and The Peoples Temple being the name of Jones’ church).  Nevertheless, once you put the similarities aside you’ll find this young band of brothers (Spencer and William Young and Alex and George Szegedy) are the rarest breed amongst today’s rising crop of garage rockers —  An act who are more than the sum of their influences.

Key here, is the maturity and variety of their songcraft.  Sons of Stone begins with the title track, a mid-tempo, psychedelic rock track driven by a glimmering and repetitive guitar riff and surrounded by generous amounts of feedback and echo.  “Visions of Stone” and “Where You Gonna Go,” meanwhile, are more stripped down, and steeped in the tradition of early British Invasion bands.   Later you’ll encounter atmospheric meditations, a la Spacemen 3, on “Never Really (Saw Me Comin’ Round”) and Middle Eastern influences creep into  “The Surf.”  It’s on tracks like “Starscteamer” and “Axe Man,” though, that the brothers really show their skill.  The former is a blazing garage rock number, played over a track of excited screams.  The background could be uncontrolled teenagers seeing The Beatles for the first time, guitar strings being shredded to death, amps on fire, or some of each.  On the latter, The Peoples Temple, incorporate elements of early 21st century garage rockers like The Strokes or Franz Ferdinand into their mix.  The bass line is positively danceable, as is the beat, and the guitars alternate between short, pointed bits and looser, dangling rhythms.  It all culminates in a huge, memorable chorus that is both agitated and delightful to sing.  Give this one a quick studio shine and it could dominate airwaves.  Give yourself in to this album, however, and there’s no doubt it will dominate your turntable. 9 out of 10 on The Rockometer.