Warning: "continue" targeting switch is equivalent to "break". Did you mean to use "continue 2"? in /nfs/c06/h01/mnt/88637/domains/blog.irockcleveland.com/html/wp-includes/pomo/plural-forms.php on line 210
 I Rock Cleveland I Rock Cleveland | The Rockometer: Past Life Martyred Saints by EMA

The Rockometer: Past Life Martyred Saints by EMA 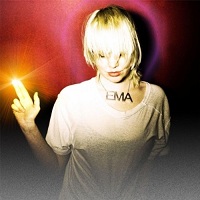 Like the best art chronicling unexpected and unwelcome, life-changing events, EMA’s Past Life Martyred Saints, Erika Anderson’s first album since the breakup of her previous band, Gowns, and her previous relationship with Gowns collaborator, Ezra Buchla, features a range of emotions, both positive and negative, which shift by the day, by the hour, the minute, or in this case, within a song.  One moment, on a track like “Grey Ship,”  she comes off as distant and broken.  The acoustic guitar she’s playing sounds rickety and old, while the electric emanates a painful, groan of a drone.  Three minutes in, however, there’s a noticeable shift.  The tones are cleaner — The drone has a noticeable low-end and the keyboards are full and ominous.  Resignation turns into resolve and the song erupts with a confident crescendo of guitar.  No longer deflated, she is back, maybe stronger than before.

That’s the way these things work.  One can quickly transition from “I can’t,” to “Maybe, I can,” and from “Fuck it,” to “Yes, I can.”  Emotions get mixed.  People get hurt.  On “California,”  regret is expressed with a side of vengeance.  “Fuck Calfironia,” are the first words one hears as a bright, orchestral hum carefully and continually shifts in the background.  The vocals, meanwhile, stream freely and alternate between quick, rap-like lines and slower, more deliberate sections, both of which are punctuated by big booming, hollowed-out percussion and are delivered with the distinct bite of someone who’s been bitten.   Later, “Afternoon,” and “Marked,” both show Anderson as being vulnerable, again.  The former, a ballad whose simple guitar melody reaches back to the pained expressions of Elliott Smith, drives the doubt home with the repeated line, “If this time through/We don’t get it right/I’ll come back to you/In another life.”  On the latter, the scratch of an acoustic guitar, mimics the agitated mindset of one on the brink.  This sense is only exacerbated with the painful observation, “My arms, they are see-through plastic/Bloodless plastic/Skinless Plastic.”  Yet, as lowly as Anderson lets herself fall, the most beautiful melody emerges.  Her voice becomes light, sweet and hopeful as it’s matched by warm keyboard tones, tones which all but eliminate the memory of that insatiable, uncomfortable  scratch.

By the time we get to album closer, “Red Star,” Anderson’s recovery is all but complete.  A shifting soundscape and creaky folk melody make way for a murky blues riff, one which gains confidence and volume until it lifts the track out of the murk and high into the sky, onward and upward, until it reaches a big rock anthem ending.  It’s a transformation similar to the one undergone by EMA, and Anderson as an artist.  Past Life Martyred Saints began with the shell of an artist ready to board a grey ship into the abyss.  Then, as it progressed, and she displayed that diversity in her songwriting, from folk to drone, and ballads, rock, and noise, all confidently transitioned from one to the next; And as the songs, themselves, became more personal and pointed, replacing the wild, druggy visions of her past work with a real woman, with real emotion, all expressed in vivid detail, a real star emerged.   She faced her pain.  She has the scars.  And now, she has produced a powerful, gripping and memorable album.  10 out of 10 on The Rockometer.