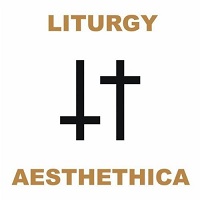 Liturgy aren’t a black metal act, but they do play one on stage and in the studio.  The Brooklyn-based band don’t walk, talk, or dress the part, and consequently, draw much ire from black metal faithful who prefer their machine gun riffs and guttural growls only when they come replete with corpse paint.  It’s their loss for  Aesthethica is as forward-thinking as any metal album, black or otherwise, that you’re likely to encounter.  Listen closely, and the musicianship of Hunter Hunt Hendrix (Guitar/Vocals), Greg Fox (Drums), Tyler Dusenbury (Bass), and Bernard Gann (Guitars) is tight, impressive, and down right inhuman.  Fox’s drumming is as precise as it is relentless.  He bangs out swift, complex rhythms like he has a second set of arms.  The guitars of Hendrix and Gann only know one speed and that speed has many, many sixteenth notes.  Yet, pull yourself away, and listen to the compositions of Hendrix removed from the details and something extraordinary happens — Larger melodies and grander themes begin to emerge.  “Returner” is positively joyful as its melody mimics a triumphant, Easter-morning hymn.  While on, “Glory Bronze” the dual guitar parts of Hendrix and Gann, triumphant and sincere, sound as if they were written for violin and cello and not two dudes shredding as fast as dudes can shred.  And so it goes with “Tragic Laurel,” and its melody of pain, loss, and longing, and with “Red Crown” and its sense of wonderment.  Maybe the black metal faithful are right and Liturgy aren’t black metal, for once you remove the label and all of its connotations,  you find band who have more in common with the instrumental rock of Pelican, Mogwai, and Godspeed! You Black Emperor — Bands who can evoke staggering emotion through melody — Liturgy just happen to do it with screams.   9 out of 10 on The Rockometer.