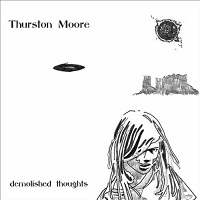 Similar in tone to recent offerings by Kurt Vile and Dinosaur Jr’s, J Mascis, Thurston Moore’s Demolished Thoughts features a musician who’s been known to rip things up from time to time working in a more thoughtful, deliberate, and sedate manner.  Gone is the fuzz, buzz and squalor which has marked much of Moore’s work with his legendary band, Sonic Youth.  In its place there’s Moore and his acoustic, violinist Samara Lubelski, and harpist Mary Lattimore, and producer Beck, meditatively piecing together unsuspectingly lush arrangements with few highs, fewer lows, and one long and smooth, mellow groove.  The fact that nothing immediately stands out, shouldn’t wholly be taken as a negative.  For, again, like those records by Vile and Mascis, it’s in the subtly plotted details where this one really shines.  It’s there, in the stretched and wavering notes which close “Illuminine;”; In the juxtaposition of Lubelski’s agitated violin melodies with Lattimore’s stubbornly, elegant harp throughout “Benediction;” In how Lattimore, Lubelski, and Moore are able to mimic a noisy, crescendo in the traditional Sonic Youth style on “Orchard Street,” but do so quietly, and at a measured pace, with dissonant melodies and loosely played strings taking the place of relentless static and overloaded amps.  Demolished Thoughts may not be what we expected, or what we thought we needed from an alt-rock guitar idol like Moore.  And it certainly won’t help bring about a sea change to the Rock ‘N’ Roll landscape like Sonic Youth’s classics.  However, this album, like J Mascis’ Several Shades of Why, are both bold statements in their own right as they prove the old adage, “Is it better to burn out or to fade away?” is no longer an either/or proposition.  There’s a middle path emerging —  To age with dignity. 8 out of 10 on The Rockometer