The Rockometer: David Comes to Life by Fucked UP 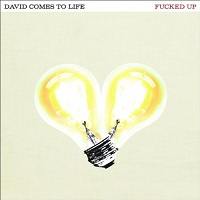 Is the rock opera, David Comes to Life, by the everything-and-a-hardcore band, Fucked Up, too ambitious of a project, or is it not ambitious enough?  With its story of young love gone horribly wrong in ‘8os England, and its arc, that of a Greek Tragedy (complete with a mingling narrator, I should add), and its back story, and companion compilation (David’s Town), and, not to mention 16 tracks spread over two records it is a  massive piece of work.  That’s for sure.

Now, let’s be clear, no one, and I mean no one, does guitar rock quite like this Canadian outfit does. Guitarists Ben Cook, Mike Haliechuk, and Josh Zuckler can mesmerize and brutalize, often within the same song.  They’ll wander for minutes, each pursuing their own muse, then come together to punch and punctuate.  Plus, the songs collected here, are some of the band’s strongest to date.  “Queen of Hearts,” featuring rising indie starlet, Madeline Follin of Cults, along side vocalist Damian Abraham’s I-drink-Draino-for-breakfast-every-day howl, may be their purest pop sentiment to date, and that’s in spite of, or maybe because of those guitars — One screeching like The Clash’s “Police on My Back,” and the other two spiraling fiercely, strangling every bit of open space.

“The Truth I Know,” and “Running on Nothing,” meanwhile, add burliness and density to workingman, pub rock, until the songs are nothing but ordinary four-four stompers.  Then, there’s the old-school oi of “Serve Me Right,” revved and ramped up to a wild-eyed rant, and the Queen meets Thin Lizzy meets a fist upside the head of “Life in Paper.”  These songs are big, bold, and do the unthinkable.  They redefine punk.

Still, by the third side, no amount of sly arpeggios, no amount of psych rock guitar excursions and no amount of sedate, acoustic intros can hide the fact that your ears have been under constant assault for an hour.  The human ear can only process so much, and in this regard, the overriding thickness of David Comes to Life does itself no favors.  Fucked Up’s best work, like their last full-length, The Chemistry of Common Life, and their series of Zodiac singles realized this fact.  They would break up these all-consuming  sounds with extended instrumentals, shifts into complex song structures, or (relatively) quieter passages.  Here, it seems as if they became so obsessed with the story line of David, and had so much to say and only four sides to say it, that they had no choice but to wedge as much as they could into this double album.  Sure, “One More Night,” does deliver a big finish of ascending scales and arching guitars, one befit of a work of such a grand, and consuming scope, but one is left to ponder:  What if David, wrecked of guilt, and wrought with existential crises died for naught?  What if no one witnessed his end?  Were Fucked Up too ambitious?  Or, were they not ambitious enough?  7 out of 10 on The Rockometer