Warning: "continue" targeting switch is equivalent to "break". Did you mean to use "continue 2"? in /nfs/c06/h01/mnt/88637/domains/blog.irockcleveland.com/html/wp-includes/pomo/plural-forms.php on line 210
 I Rock Cleveland I Rock Cleveland | Top Jam: “Speak in Tongues” by Megachurch 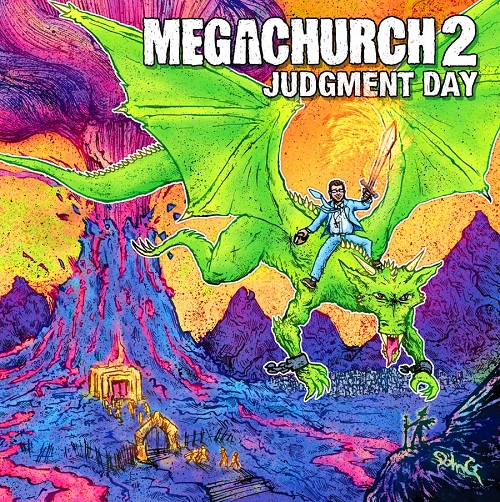 Poor Harold Camping.  Twice he tried to warn us sinners about our day of reckoning and twice the day of the Apocalypse came and went and we still stood.  What went wrong?  The day of Jesus’ coming has to be in the Bible somewhere.

To find out where Camping went awry I ran some numbers of my own.  I started with May 21st, Camping’s last prediction.  Added in 144,000 (The height of the walls of New Jerusalem).  Divided by 33 (The number of days the woman is unclean after the birth of a son).  Divided again by 5 (The number of knots in a tzitzit).  Multiplied the result by the number of commandments which begin with the phrase, “Thou shalt not.”   Then, I carried the 1 and I came up with June 24th 2011.

Coincidentally, or not, that’s the same day Cleveland heavies Megachurch, drop their second album, Megachurch 2: Judgment Day.  And, on that day, the world will not only experience the second coming (For real this time) but also they will be witness to eight righteously sacrilegious jams, like today’s featured cut, “Speak in Tongues.”

With dual bassists, Mikey Baranick and Brian Hill, this one rumbles with the power and ferocity of underground darlings, Lightning Bolt.  Yet, the force with which Megachurch plays is only half the story.  Drummer Dan Price steers the track through quick transitions, guiding those rumbles through a surprisingly strong melody, complete with twists, turns and ultimately on to a manic climax of throbbing rhythms and rabid tongues.  In other words, this is the sound of your next Apocalypse.

Megachurch’s album release show for Megachurch 2: Judgment Day will take place on Friday, July 1st at the Beachland Tavern.  You can pre-order your copy now via the band’s site on Bandcamp.