Warning: "continue" targeting switch is equivalent to "break". Did you mean to use "continue 2"? in /nfs/c06/h01/mnt/88637/domains/blog.irockcleveland.com/html/wp-includes/pomo/plural-forms.php on line 210
 I Rock Cleveland I Rock Cleveland | The Rockometer: Suck it and See by Arctic Monkeys

The Rockometer: Suck it and See by Arctic Monkeys 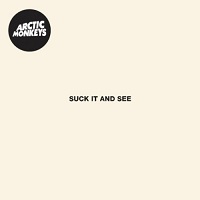 There’s nothing wrong with a band wanting to record a Brit-Pop album in 2011.  Hell, there’s nothing wrong with the Arctic Monkeys wanting to be that band.  There is a problem, however, with the words that come out of lead singer Alex Turner’s mouth when he does channel the spirit of Oasis, Suede, Pulp, and um, Stereophonics.  Once a song, some times more, Turner will utter a line so regrettable you’ll wish English was your second language.  Let’s see, there’s “I’ve been seeing things/Belly buttons, piercings/In the sky at night,” from “Black Treacle,” a track where Turner later refers to himself as “Sundance Kid behind a synthesizer.”  Something called “Dog shit Rock ‘N’ Roll” on the song “Library Pictures.”  Later, “Don’t Sit Down ‘Cause I Moved Your Chair,” ruins a big bulldozing guitar riff with such toss-offs like “Bite the lightning and tell me how it tastes/Kung Fu fighting on your roller skates/Do the Macarena in the Devil’s lair/But just don’t sit down ’cause I moved your chair.”  It’s like I want to rock that song and bully my neighbors with its pulsing bass, but every time I get into that riff, and I’m like yes, this is it, I say no, I don’t want to do the Macarena.  Then, there’s the case  of “Piledriver Waltz,” where a woman Turner meets has a bad night, a bad morning, a bad breakfast with a bad waitress and he consoles her with, “If you’re going to try to walk on water/Make sure you wear your comfortable shoes.”  I don’t know about you, but if I had a shit day and my friend came up to me and said my problem was my choice of footwear, I’d reply, “What the fuck does that mean?”  It means, in your best broken English, “Arctic Monkey fun-time party band.  Make good Rock ‘N’ Roll.  Arctic Monkey be bigger than Oasis because they rock.  Suck it and see!”   5 out of 10 on The Rockometer.