Warning: "continue" targeting switch is equivalent to "break". Did you mean to use "continue 2"? in /nfs/c06/h01/mnt/88637/domains/blog.irockcleveland.com/html/wp-includes/pomo/plural-forms.php on line 210
 I Rock Cleveland I Rock Cleveland | The Rockometer: We Are the Champions by JEFF the Brotherhood

The Rockometer: We Are the Champions by JEFF the Brotherhood 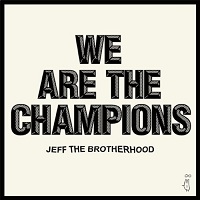 JEFF the Brotherhood
We Are the Champions
Infinity Cat

Going back to Rock ‘N’ Roll 101 I seem to remember something about band names, and more specifically about bad band names and how a bad name is right up there with the too clever promo shot and a bio which name-checks Radiohead as a sure fire way to curb your band’s potential.  Not that JEFF the Brotherood is the most egregious offender out there (Hello Dale Earnhardt Jr, Jr).  And it’s not like brothers Jake and Jamin Orrall chose to name their band Chicago, Boston, or James Taylor.  Still, when you hear the name JEFF the Brotherhood, do you think ROCK?  You should.

With just three strings, three drums, three cymbals and one tasty racket, JEFF the Brotherhood’s We Are the Champions is an album which covers broad swaths of the rock canon, yet, is neither dumbed down nor needlessly polished.  Lead track “Hey Friend” sets the stage with a highly combustible combination of simmering stoner-rock and blustery, grunge rumble.  And while that guitar may me missing a few strings, it sure isn’t lacking in tone, volume, or versatility.  “Cool Out” and “Shredder” both blast high-tempo, desert rock.  The duo then takes a much different approach on “Diamond Way,” a track with a noticeable kraut-rock lineage, and spacey, blissed out guitars.  Later, the brothers easily tackle pogo-ready power pop (“Mellow,”) fuzzy, ’90s styled slacker-rock (“Bummer,”) and even work in a sentimental ballad (“Endless Fire.”)

Is there anything this duo can’t do?  Well, there is the aptly named “Ripper,” where the pair weld a mucky blues riff with three chords and a cloud of dust punk rock, and twist it into a shred fest.  That’s impressive.  They only falter when they bring in the sitar for the directionless excursion that is “Health and Strength.” Ok, so they have to work on finding better drugs and finding a better yogi, and maybe come up with a better band name.  Well, on second thought, let’s keep the band name.  With an album as accomplished as We Are the Champions, JEFF the Brotherhood have earned the right to call themselves whatever they want.8 out of 10 on The Rockometer