Warning: "continue" targeting switch is equivalent to "break". Did you mean to use "continue 2"? in /nfs/c06/h01/mnt/88637/domains/blog.irockcleveland.com/html/wp-includes/pomo/plural-forms.php on line 210
 I Rock Cleveland I Rock Cleveland | 2011 Pitchfork Music Festival Day 1: Guided by Voices 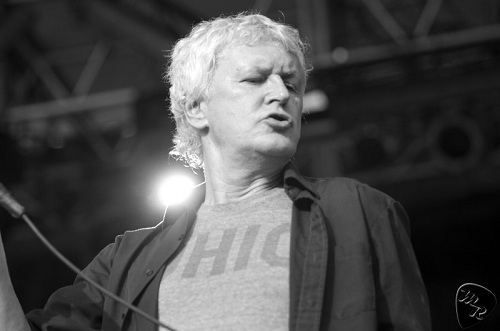 Are you kidding?  Men skipped out on Thurston Moore to load up on beer.  The “G-B-V!” chants had already started.  This crowd was not only ready, they were juiced.

And there was Pollard, surprisingly spry for his age, showing off his array of rock kicks.  There was guitarist, Mitch Mitchell, wearing his special pants for the evening.  Those lime-green levi’s sure stuck out.  Guitarist Tobin Sprout, bassist Greg Demos, and drummer Kevin Fennell were primed and ready to rock, too.  For unlike most reunion acts, one gets the sense that Dayton’s Guided by Voices, honestly and truly, are enjoying their victory lap around the states.  And, unlike most veteran acts, Guided by Voices still have a youthful vigor that belies their age. Most importantly, unlike many of the bands you’ll see at the Pitchfork Music Festival, Guided by Voices perform.

It’s not just the rock kicks, or Mitch Mitchell’s windmills, or the beer coolers or the booze.  These dudes playing songs as old as some of the attendees, put every ounce of themselves and, well, for Pollard, every ounce of that Cuervo, into each song.

Playing a set drawn mainly from the albums Vampire On Titus, Propeller, Bee Thousand, Alien Lanes, and Under the Bushes Under the Stars, and making sure to cram as many songs into a short set, the band barely took a break between each number.  The jangly pop of “Echoes Myron,” led right to the British-invasion infused power-pop of “Exit Flagger.”  “Exit Flagger” led to more rock kicks, windmills, and microphone acrobatics.

Realizing time was short and fans traveled far and wide just to see this one set (One acquaintance of mine was making his 40th GBV show this night), Pollard and company backloaded the set with their “hits.”  As the band ripped through “Tractor Rape Chain,” “Hot Freaks,” Gold Heart Mountaintop Queen Directory,” “Kicker of Elves,” “Game of Pricks,” “I am a Scientist,” and “Unleashed! The Largehearted Boy,” the crowd sang along and punctuated those choruses with fists and beers in the air.  Some of the more optimistic, even stuck around after the band’s goodbye, and kept chanting “G-B-V!” hoping for the improbable encore.  The encore didn’t come, but it hardly mattered.  This band who once were compared to The Who with a whole bunch of buts (But, they’re from the Midwest…But, they can be sloppy and unpredictable…But, their records are lo-fi…But, they drink too much…) now did something that Roger Daltrey and Pete Townsend could never do — Stay relevant and still rip into their later years. 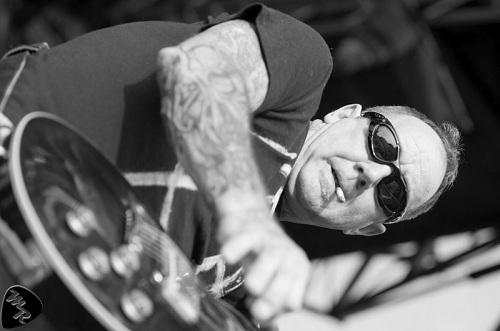