Warning: "continue" targeting switch is equivalent to "break". Did you mean to use "continue 2"? in /nfs/c06/h01/mnt/88637/domains/blog.irockcleveland.com/html/wp-includes/pomo/plural-forms.php on line 210
 I Rock Cleveland I Rock Cleveland | 2011 Pitchfork Music Festival Day 1: Thurston Moore

No matter what festival you attend, no matter who’s manning the sound boards, and no matter how many speakers are pointing at the crowd, when you have 30+ bands playing over three days someone is going to get cursed by shit sound.  Friday, unfortunately, that performer was Sonic Youth’s Thurston Moore.

As Moore first took the stage, he made some quick jokes about his band’s volume (“Is that too loud?  We’re on a noise break.”), then noticing the feedback on his microphone, asked the sound man to turn it down.  This was not a Sonic Youth show.

Touring on Demolished Thoughts, his latest solo album of slight, ruminative, and intricate ballads, feedback was no longer a central piece of his performance, but a detriment to parsing the tightly woven melodies on acoustic guitar, violin and harp.  The violin sounded especially thin, and that interplay between the musicians, so meticulous and masterful on his album, came across muddled.  And, yes, it should have been louder, too.  If you weren’t front and center for Moore’s set, the band’s songs were quickly sucked up by the hum of the crowd.  On another day and another stage (Preferably, one inside) Moore’s  work would have shined bright.  Today, we were left looking at the man who epitomized indie-rock cool and wondering what could have been. 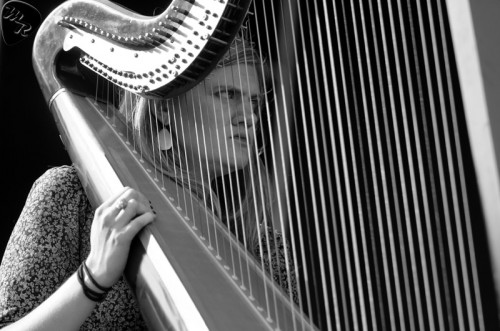