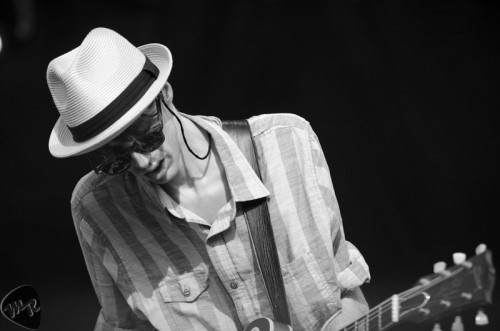 At a concert hall or a rock club, Bradford Cox and Deerhunter can mesmerize.  Their wandering tones waver in the air, slyly mixing and merging to create a guitar sound unrivaled amongst today’s acts.  Sunday, however, they turned up the volume and then added a little more.  They turned up the reverb, and added more.  They turned up the echo, and, you guessed it, added a whole lot more.  As a result, those sounds, so beautiful in the right setting, were a formless jumble as they made their way across the grounds.  Perhaps if you were in the right spot, you got the band’s intended effect.  I couldn’t find it.  Only the drums and bass were perceptible.

Still, even with a sound which sent many of the shade people back into the shade on this sweltering summer day, Cox did provide one of the festival’s finer moment when he closed his set with “He Would Have Laughed,” his 2010 tribute to the departed rocker, Jay Reatard.  It was on these same grounds, on the very same stage, in 2008 where Reatard’s career really began to take off. It was only two years later when he would die of an overdose.  This, however, was not a time to mourn.  Hearing Cox’s loving tribute brought back so many fine memories for myself and, presumably, for many others in attendance, that it became a celebration of the life and music of two talented artists.